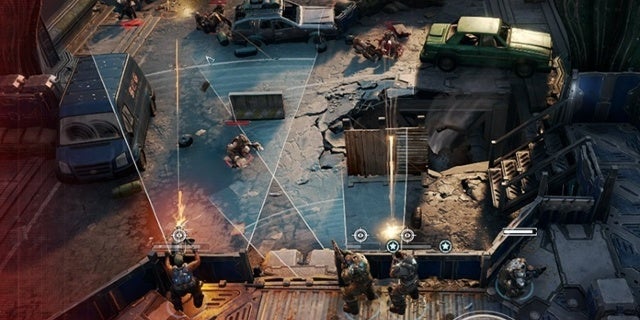 Gears Tactics was originally revealed during Microsoft’s E3 presentation in 2018, and while many fans of the franchise are looking forward to the next numbered installment, which drops in just a few weeks, some have been pumped for the tactical take on the action series. That said, the upcoming title has only been revealed for a PC release, with fans on Xbox One wondering if they would be getting a version of the game as well, especially after keyboard and mouse support were added to the console. That said, The Coalition’s Rod Fergusson himself has confirmed that Gears Tactics will be coming to Xbox One.

When asked on Twitter if The Coalition was handling development of Gears Tactics and if the game would be appearing on Xbox One, Fergusson noted that the Gears 5 devs were not leading the charge, but the title is coming to console. In fact, it is Splash Damage who is behind Gears Tactics. Fans may know their work from the Gears of War 4 multiplayer, Halo: The Master Chief Collection, and on the upcoming Gears 5.

It’s a great team at @splashdamage and yes.

Gears Tactics is currently without a concrete release date, but we at least know that it will be coming to both PC and Xbox One when it does arrive. As for what is next in the franchise, Gears 5 is set to launch on September 10th for PC and Xbox One. For even more on the upcoming title, check out some of our previous coverage.

In a recent interview, and talking about The Coalition, multiplayer design director Ryan Cleven said, “They’re extremely passionate about bringing their mark, a high degree of quality, and a legacy that Gears fans will recognize. There is no magic bullet; it’s trusting the people around you. [Studio head Rod Fergusson] has this saying he repeats every time we start a new project: ‘If you want to go fast, go alone. If you want to go far, go together.’ That’s something we really believe in at the studio. We believe in trusting each other so we can get efficiency out of that.”

What do you think about all of this? Are you glad that Gears Tactics will also be coming to Xbox One? Sound off in the comment section below, or feel free to hit me up over on Twitter @anarkE7!