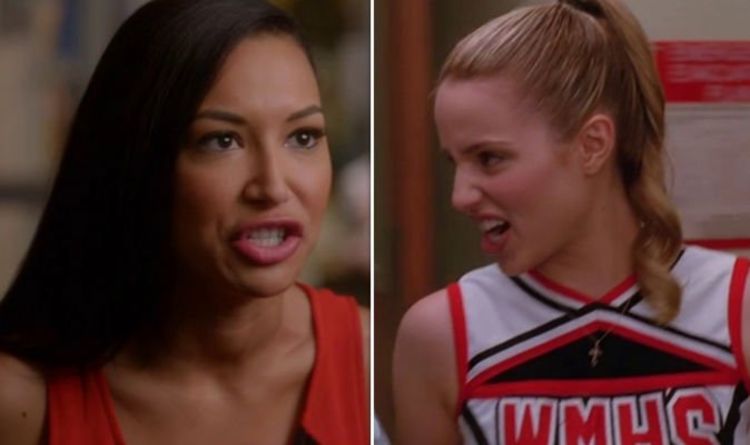 The McKinley high cheerleader was demoted to bottom of the pyramid after breaking the coaches “no plastics policy” and getting cosmetic surgery over the summer break.

There was later a confrontation in the hallway that saw Santana push Quinn against the lockers accusing her of leaking the news of her summer surgery to get a higher ranking in the squad.

However, the fight scene seemed to not go exactly to plan as Santana star Naya Rivera revealed in her co-star’s podcast Showmance.

The foursome reminisced about their least favourite moments on the show in a game that saw the stars guess each other’s answers.

The star revealed her co-star got “very upset” after the scene left her injured in real life.

Heather said: “When Santana and Quinn get in a fight outside the lockers because I remember you actually got hurt from it and I remember you were very upset”.

Naya responded: “Oh I got scratched, she really thought we were fighting… No no no no don’t touch the face”.

The stars also opened up about the songs they hated the most during their time on the show.

Surprisingly, despite the cover achieving over 500,000 digital sales, it seems one of the show’s early covers was incredibly unpopular with the cast.

When asked to guess which song their co-star disliked the most it was revealed that both Artie star Kevin McHale and Heather hated Don’t Stop Belevin’.

Laughing at her co-star’s guess, Naya told hosts Kevin and Jenna: “That is up there.”

When it came to Naya’s turn to guess Heather’s least favourite song, she chose Keep Holding On.

Unfortunately Heather had confessed: “My least favourite song is, Don’t Stop Believin’, sung by Glee, not the original.”

Kevin went on to agree, admitting his least favourite Glee cover was also the track by Journey.

Don’t Stop Believin’ was performed in the show’s pilot and is loved by fans across the world but it seems it doesn’t hold a place in the hearts of the cast.

Glee seasons 1-6 are available to stream on Netflix now.