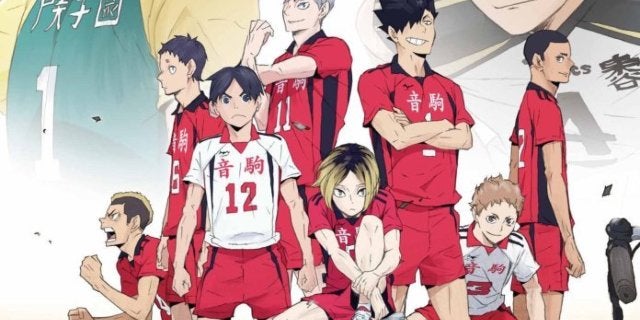 The Haikyu!! franchise recently held a major “Haikyu!! no Hi Zenjitsu-Sai” celebratiuon event in Japan, and not only did it confirm that the fourth season of the series would be officially releases next January, it also announced that fans will be getting even more goodness from the anime series. A new OVA special is now in the works and will feature Nekoma High School, Fukurodani Academy, Nohebi Academy, and Itachiyama Academy pining for the open spots in the Nationals.

This OVA project bringing the Tokyo Qualifiers to life with two entries, “Land vs. Sky” and “The Path of the Ball” and is currently scheduled to release January 22, 2020 in Japan. You can check out the visual for the new OVA below!

Fans attending Jump Festa 2020 in Japan this December will be able to purchase the new OVA episodes in advance, but for everyone else, the OVA will go on sale on Blu-ray and DVD in January. Fans who do purchase it at Jump Festa will also get specialty goods and extras not included in the retail release. Unfortunately for fans outside of Japan, there are no details as to a release in other territories.

But given the popularity of the anime series as whole, and the upcoming fourth season launching at the same time, maybe this one will make its way sometime in late 2020. But that’s all conjecture for now.

Haikyu!! was originally created by Haruichi Furudate for Shueisha’s Weekly Shonen Jump in 2012, and its manga has sold 28 million copies to date. It has been licensed for an English language release by Viz Media, and has three seasons of an anime adaptation from Production I.G. under its belt with a fourth on the way.

If you’re interested in seeing what all the Haikyu!! fuss is all about, the first three seasons of the series can currently be found streaming on Crunchyroll and is described as such, “Based off of the original Weekly Shonen Jump manga series from Haruichi Furudate, Haikyu!! is a slice-of-life sports anime revolving around Shoyo Hinata’s love of volleyball. Inspired by a small-statured pro volleyball player, Hinata creates a volleyball team in his last year of middle school. Unfortunately the team is matched up against the “King of the Court” Tobio Kageyama’s team in their first tournament and inevitably lose. After the crushing defeat, Hinata vows to surpass Kageyama After entering high school, Hinata joins the volleyball team only to find that Tobio has also joined.”