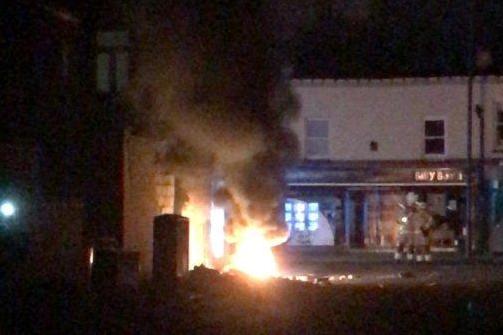 A suspected explosion has pressured scores of residents to be evacuated from their homes in south-west London.

Shocked witnesses described listening to a “boom” as a constructing on High Street in Hampton Hill caught hearth on Tuesday evening.

Dramatic photos confirmed smoke billowing into the sky as firefighters tackled a blaze close to a terrace of retailers and homes.

Fire crews have been first referred to as to reviews of a suspected explosion and hearth at about 8.10pm, London Fire Brigade (LFB) stated.

LFB gave no additional particulars on the reason for the blast.

Part of the excessive road and Windmill Road was closed off as hearth crews remained on the scene into the night.

Some 30 residents have been evacuated from their homes.

One witness wrote on Twitter: “Lights flickered for a couple of minutes, then a increase from outdoors.