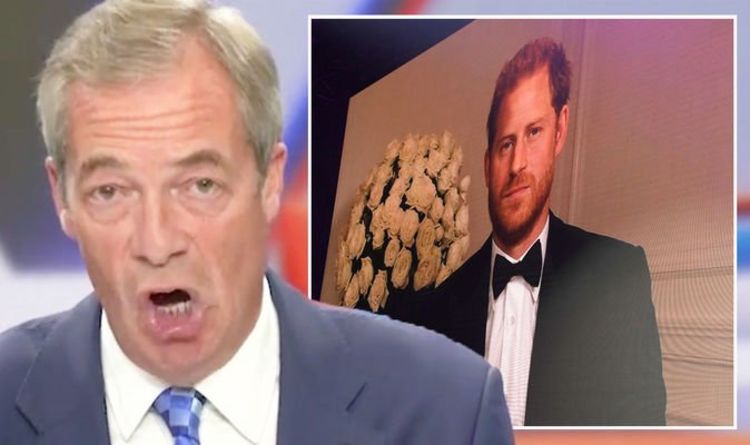 Nigel Farage returned to front his primetime show on GB News on Thursday evening and had a number of headlines to discuss. And high on the agenda was the recent speech Prince Harry had made after he attended last night’s GQ Awards in London via video link from his home in California. Appearing on the big screen, Harry blasted vaccine hesitancy and a so-called “disparity” in the developing world who’d been “misinformed” by the news and social media when it came to receiving the jab against Covid. However, Farage was quick to blast the royal for pointing the finger at the media for the aforementioned hesitancy – and didn’t hold back when he skewered the idea of “controlling” what the media publishes.

Kicking off his rant, Farage said: “Harry and Meghan said after recent events that they were left speechless, and I did express on this show the hope that they actually meant it.

“But unfortunately that was not the case and Prince Harry was live, beamed in from the west coast to a GQ Awards ceremony in London last night, (where) an award was going to the Oxford AstraZeneca team.

“And I wonder whether Prince Harry is trying to become Professor Harry because it seems he is now a world-leading authority, not just in how media should be managed or what we should all think but indeed, in vaccines themselves.”

The GB News anchor then cut to the speech in question in which the Duke of Sussex took aim at the media.

“There is a huge disparity between who can and cannot access the vaccine.

“Less than two percent of people in the developing world have received a single dose at this point, and many of the healthcare workers are still not vaccinated at this point.

“We cannot move forward together unless we address this imbalance as one.”

Bringing up the media’s supposed role in contributing to vaccine hesitancy, Harry continued: “At the same time, families around the world are being overwhelmed by mass scale misinformation across news media and social media,

“(This is) where those who peddle in lies and fear are creating vaccine hesitancy which in turn is dividing communities and eroding trust.

“This is a system we need to break if we are to overcome COVID-19 and the risk of new variants.”

Taking issue with the royal’s phrasing, Farage wasted no time in slapping down Harry’s claims.

“‘This is a system we need to break’, according to Professor Prince Harry,” Farage joked.

The GB News star continued: “Presumably, I don’t know, I presume what he means is somehow we need to control what is said in mainstream media and social media,

“Because some of it does not accord to the world Harry thinks it should be.

“I find the whole thing astonishing,” Farage signed off, staggered by Harry’s tirade against the media and newfound “authoritative” attitude to vaccines.

And Farage didn’t seem alone in his criticism with many GB News viewers taking to Twitter to express their views.

“Massive fan of Harry but he is losing the plot,” one fan replied to the clip on the GB News Twitter page.

“Only 2% vaccinated. So where are the news reports on the devastation covid must be wreaking in all these places,” a second argued.

However, a third hit back: “Still banging that drum Nigel…”

Farage airs Monday to Thursday at 7pm on GB News.