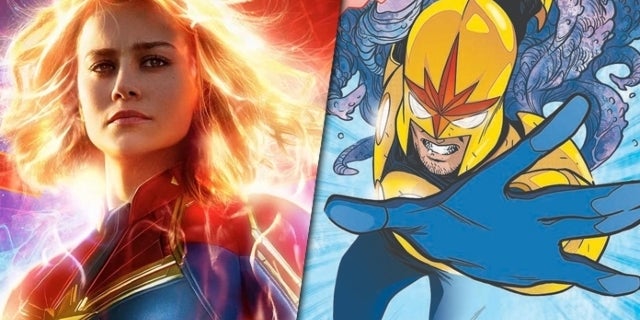 If you’ve been online today, you’ll know Richard Rider‘s been all the rage. Thanks to an interview with Joe and Anthony Russo, fans scrambled to try and find the Human Rocket in one of the portals shots at the end of the movie before ComicBook.com was able to confirm with Joe Russo it was all a joke. Still, legions of Nova fans — led by one maniac, in particular — took to Twitter all afternoon to rave about the character while expressing desires for him to finally join the Marvel Cinematic Universe.

With the introduction of Captain Marvel (Brie Larson) within the past year, the question still begs to be asked — is a Nova even needed in the MCU after all? On the surface, Danvers’ MCU powers closely resemble those of Nova and other Centurions in the Nova Corps. The photon-based powers allow flight and all kinds of energy repulsion.

But even if we took the similar power sets aside, Larson’s Carol Danvers is still skirting awfully close to doing to job Richard Rider does in the comics. As evidenced by Avengers: Endgame, Danvers has been busy keeping law among the cosmos. Gone were the days of solely helping the Skrulls rebel against their oppressors, but she was helping out all across the universe. She was acting like her own intergalactic police force and…well, that’s exactly the job of Nova and the Nova Corps.

Another thing to support the swap-out would be the tricky timing involved with introducing the character. Judging by how events in the MCU have shaken out now, Nova’s in-universe creation probably takes place sometime after Thanos (Josh Brolin) razes Xandar in pursuit of the Power Stone. The soonest a Nova film would enter theaters would be 2022 and that’s if Marvel Studios fast-tracked it. As of now, we have yet to get serious reports an actual Nova standalone is in development so it’s like a lot later than that. If that’s the case, it’d be another out-of-order film to add to Marvel’s ever-expanding catalog.

Do you think we’ll ever see Nova in the MCU? Let us know your thoughts in the comments below or by tweeting me at @AdamBarnhardt to chat all things MCU!