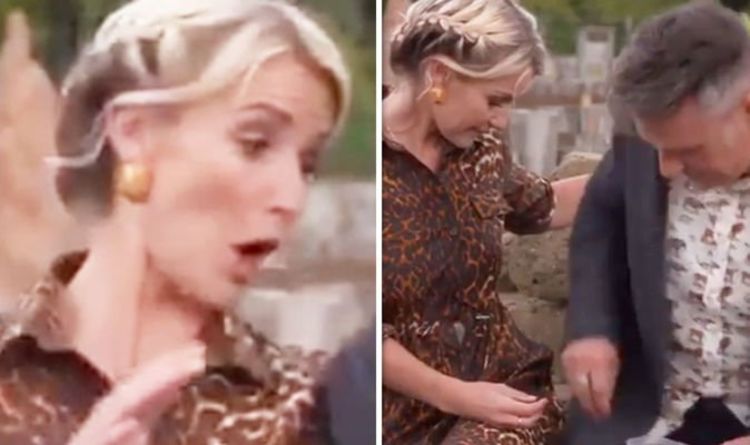 Helen Skelton, 36, joined her co-host Nick Baker, 47, as the pair prepared for their on-screen segment for the show Big Week at The Zoo. The Countryfile host could be seen sitting down on a rock alongside Nick as the duo were surrounded by a few meerkats. As her co-star leaned back, she grabbed his arm saying: “Mind you, you’re going to sit on his head,” referring to the meerkat which scurried around the pair. Nick replied: “I’m not going to sit on his head.”

As Helen turned to face the camera, she let out a scream before jumping from the rock in a fit of giggles.

She could not contain her amusement as the camera crew could also be heard laughing in the background.

Nick asked: “What happened there?” as Helen returned to her initial position, unable to give further details.

She shared the cheeky behind-the-scenes clip on her Instagram account where she revealed the meerkat had bitten her bottom.

In view of her 124,000 followers, she wrote: “What happens when a meerkat bites your bum….New series alert…Big Week at the Zoo…. @channel5_tv 8pm this eve xx #conservation #zoo #wildlife #filmjng #telly #neverworkwithanimals #alwaysworkwithanimals.”

Fans rushed to comment on the post, and many admitted they could not stop rewatching the hilarious clip.

Another person commented: “This is TV gold.”

While a third person added: “You’ll definitely be on the next It’ll Be Alright On The Night.”

The clip received over 25,000 likes in a few hours, after Helen explained the new series of the animal show will hit viewers screens tonight.

The duo were filming their segment for tonight’s offering at Yorkshire Wildlife Park where the incident with the meerkat took place.

Helen later shared a gorgeous snap as she showcased her ensemble for tonight’s episode.

She completed the look with a pair of tanned boots as she beamed at the camera.

Big Week At The Zoo airs tonight on Channel 5 at 8pm.