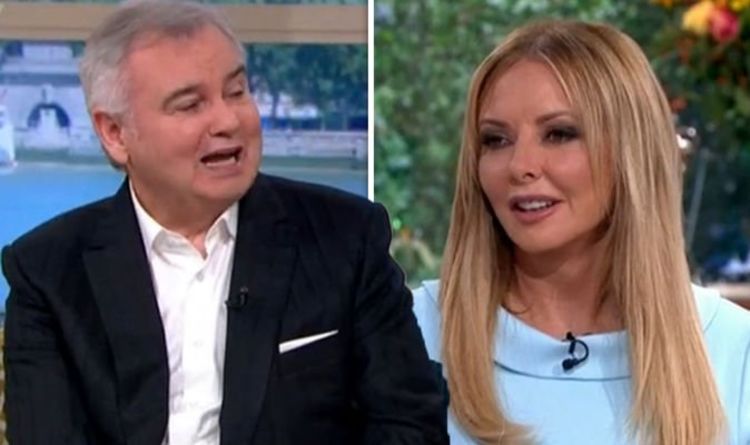 Carol Vorderman was on the programme to discuss a survey which has revealed two thirds of over 50s feel less valued.

The former Countdown star addressed her own experiences of ageism and spoke about the reactions she has on social media.

But This Morning host Eamonn Holmes asked Carol whether he had offended her with comments he had made over the years.

Addressing whether the UK is an ageist society, Carol said: “I think we are becoming less so but I don’t think social media has helped because as we all know because we all get the brunt of that, that does happen.

“It doesn’t help people who are at the receiving end.”

Ruth asked: “Do you respond if somebody says to you on social media ’What on earth do you look like?”

“Not really, I just mute. Lorraine [Kelly] taught me that trick. Don’t block, mute then they carry on doing their thing,” Carol retorted.

Eamonn wryly added: “I don’t get any bad remarks at all, everybody loves me. Never a foul word said.”

Turning to Carol, he went on to ask: “I tell you what, knowing you as I have for 30 odds years, one thing is you like the banter so I know there’s things I would say to you.

“You’re obviously a fine looking woman, you are but I would say probably ‘for your age’ to stop your head swelling big and you would laugh at that.

“Have I been hurting you, saying that?”

Carol replied: “No, not me. But the survey says that two thirds of people are hurt by that, they feel less valued.”

Carol reflected on how a dress she wore to a red carpet twenty years ago had attracted a lot of attention at the time as the hem line sat above her knee.

She shared: “That became a massive story, there were programmes made about it, not about the dress, about if women over 39 should wear a dress above the knees.”

The presenter continued: “What is age appropriate? Because surely it’s about the spirit of somebody.

“The stuff about ageism or gender remarks, sexism and so on they are from another time.”

Speaking about how she felt now at 58 years of age, Carol declared she was feeling “fantastic”.

“I feel fantastic, I think it’s the best decade I have had throughout my life, tragedy happens but that’s life.

“I feel freer than ever before and I think that’s the spirit of the over 50s now.”