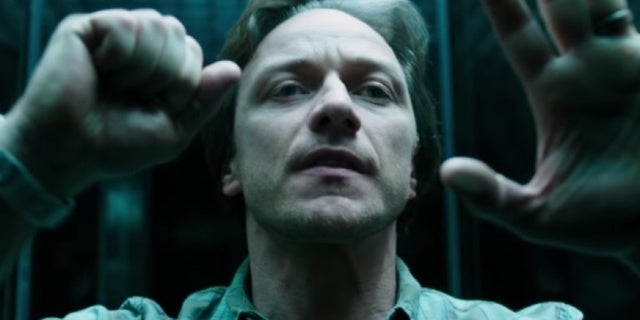 IT CHAPTER TWO is set to adapt the conclusion of Stephen King’s epic horror saga, and it sounds like that will include a slight – but layered – departure from the book. In a recent interview with Entertainment Weekly, James McAvoy spoke about his role as the older Bill Denbrough, and how he ultimately helped director Andy Muschietti craft an entirely new scene for the film. The scene, which sees Bill chasing a young boy the same age as his brother Georgie through a hall of mirrors, came about over drinks between McAvoy and Muscietti.

“We were missing a vital story beat for Bill where he dealt with his guilt that he caused his brother’s death,” McAvoy recalls. “I said to Andy, “What can we do?’…and literally in 50 minutes, he invented a whole new sequence. It was never in the script, and it isn’t in the book. It’s brilliant.”

Fans have already gotten a glimpse of the scene in the film’s promotional material, but this extra behind-the-scenes significance behind it is certainly interesting. As McAvoy further explained, his approach to Bill affected his personal life in a particularly chilling way.

“When I reread It as an adult for the film, I actually had nightmares about Pennywise (Bill Skarsgard) in a way that I never did as a child,” McAvoy explained. “As an actor, you often put on a backstory you never [see] on screen… I’ve got these memories of my character as a young boy [from the first film].”

“He’s amazing. The guy who plays the clown is terrifying,” McAvoy shared of Skarsgard’s performance in an interview earlier this year. “He’s a lovely guy, and yet he really freaked me out. I remember standing there with the rest of the cast, all these adults, and we’d all done weird freaky stuff. And we are all looking at each other going, ‘I don’t like being here. I don’t like being an actor today.’ He really did, he really freaked me out. I never liked clowns as a kid.”

IT CHAPTER TWO lands in theaters on September 6th.