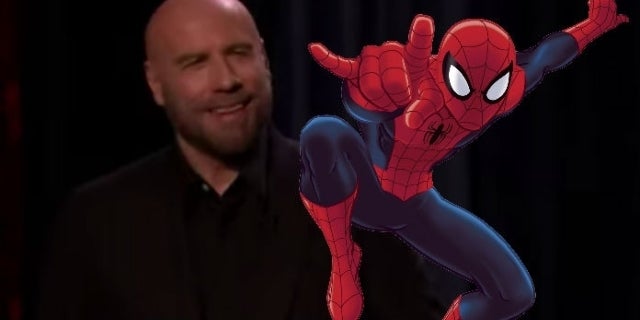 John Travolta, the legendary actor best known for his roles in Grease, Pulp Fiction, and Saturday Night Fever (to name a few) is currently making his first con appearance at FAN EXPO Boston. Travolta is in the midst of the full con experience, which includes snapping photos with fans. Dan Slott, who is known for writing Fantastic Four and Iron Man comics, took to Twitter to share his picture with Travolta, which marks the actor’s first-ever con photo op. In the image, the two men are channeling another iconic Marvel character: Spider-Man.

John Travolta’s first ever convention photo…
…was with this guy? 😀 #Thwip! pic.twitter.com/yHsI7g8j6u

Many people commented on the post with some hilarious replies:

“I didn’t even remember that he played Spider-Man,” @ChrisJonesArt joked.

“Printing, framing and displaying proudly on the mantelpiece,” @DaveHendrick wrote.

“Are you sure that wasn’t Nicholas Cage?,” @carlospedroart quipped.

Although, this reply was definitely the best:

Travolta was also a trending topic on Twitter earlier this week for his appearance on The Tonight Show with Jimmy Fallon. The actor recreated some of his most iconic characters, including Danny Zuko from Grease and Castor Troy from Face/Off. You can check out a clip here.

Travolta is currently making the rounds to promote his upcoming thriller, The Fanatic, in which he plays a mentally unstable man named Moose who begins stalking his favorite actor, Hunter Dunbar (Devon Sawa). In addition to this interesting actor pairing, the film’s biggest intrigue is that it was directed by Limp Bizkit’s Fred Durst. In fact, the story was supposedly inspired by a real-life stalker Durst had during the band’s heyday.

Travolta will be making more con appearances next week at both Wizard World Chicago and FAN EXPO Canada. (Good thing he has his own plane!)

The Fanatic hits theaters on August 30th, soon followed by a VOD and digital release on September 6th.