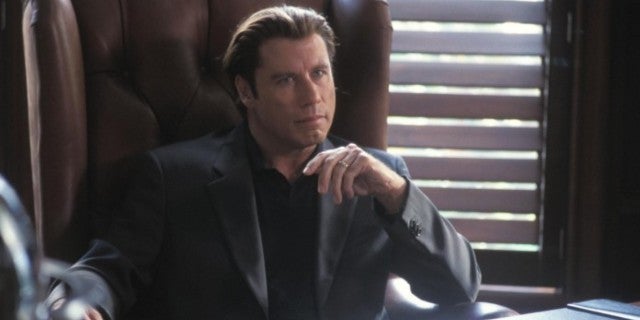 The Punisher star John Travolta would be interested in joining the Marvel Cinematic Universe if approached with a role grounded in reality.

“I’m more reality-based in acting choices. So whatever Marvel scenario invites more of a reality — like The Punisher was very reality-based, and I’m more attracted to that than fantasticism,” Travolta said at FAN EXPO Boston. “So that’s all I could say about that. That’s why I like the Bond movies, because even though they’re bigger than life, they’re still reality-based.”

For Travolta, who menaced Thomas Jane in 2004’s Marvel-inspired Punisher as villain Howard Saint, the star has long been interested in posing a threat to James Bond in the long-running franchise.

Travolta is ultimately drawn to a project when “the script is a of story that I love and want to tell,” he said.

“And is the character [one] that I can believe I can do differently enough to be entertaining to the audience? And maybe that you couldn’t imagine another actor [in the role], if I did it well enough,” Travolta said. “You say, ‘well, I don’t want to see anyone else do that role.’ And then I would feel that I had achieved my goal.”

Travolta familiarized himself the Punisher comics before appearing in that film, but told IGN in 2004 his portrayal was more influenced by the “dead real” approach taken by star Jane as grieving family man Frank Castle.

“You know, the kids have [comic books] around a lot and, occasionally, you look at it. It was time to look at what it was, and Howard Saint was a little bit more of a created, you know, character, from this,” Travolta said.

“There was a lot of talks with [producer Avi Arad] about what he thought the character of Howard was about. Just because there’s many ways to play it… Blueblood play it, you know, Connecticut? Do you play it third world? There’s many ways and, also how Tom was playing it, because if he was going to go over the top, I had this other idea of how to play Howard Saint, which was much more sinister. You know, because he was playing it so dead real, which I thought was correct, I decided to go more subtle with my interpretation of it. It’s always an interesting game to play. You have to see where all the other pieces settle before you decide what your choices are going to be.”