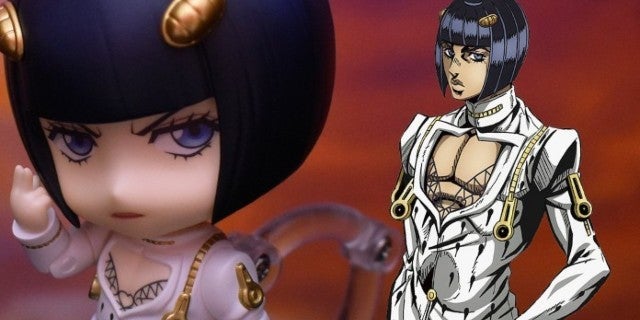 JoJo’s Bizarre Adventure‘s fifth outing, Golden Wind, might have recently ended its run, and fans are already looking to the future of the anime, but there’s still plenty of love to go around for Golden Wind and its band of latchkey kids. This especially includes new merchandise featuring the fan-favorite Bucciarati Gang, and two new additions to the Nendoroid line will be making their debut soon too. Celebrating the upcoming release of two new Golden Wind collectibles, fans recently got a new look at them with new photos.

With new Nendoroids based on Giorno Giovanna and Bruno Bucciarati coming sometime next year, this closer look at this release teases how fans can display these collectibles if they nab both of them.

It’s great to see both of these characters joining the Nendoroid line around the same time as both of them can be considered the protagonist of Golden Wind. Although Giorno is the official “JoJo” of the season, Bucciarati was at the center of the main plot. Continuously put in the middle of some of the series’ biggest moments and fights, the series itself followed Bucciarati and his gang as they tried to overthrow Passione from the inside.

This is especially true after the midway point puts them in Passione’s crosshairs, and Giorno took more of a backseat as fans saw Bucciarati struggle in some particularly surprising ways. Giorno came into the spotlight toward the series’ end, but it’s safe to say that the fifth iteration of the series would not be as strong without both of these integral stories.

JoJo’s Bizarre Adventure: Golden Wind was the fifth and now concluded part of Hirohiko Araki’s series, and follows Giorno Giovanna, the son of former series villain Dio Brando, as he joins the mafia group Passione in order to change and reform them into reputable thieves and crooks from the inside. The anime adaptation premiered last October, and can be currently found streaming on Crunchyroll.

JoJo’s Bizarre Adventure was originally created by Hirohiko Araki for Shueisha’s Weekly Shonen Jump in 1987. Currently the second longest running series in the magazine with over 100 volumes collected, the series tells the story of the Joestar family, who are each entwined in a destiny battling outrageous foes. The series has been split up into eight parts, with each part following a different generation of the Joestar family.