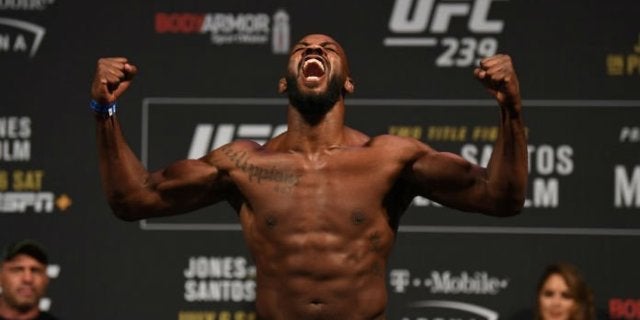 Brock Lesnar hasn’t fought in the UFC since 2016 and has been retired from the sport of mixed martial arts since June. But thanks to a few comments from Jon Jones, fans were suddenly speculating the possibility of a massive UFC money fight between the two on Monday night.

Kurt Angle appeared on Ariel Helwani’s MMA Show on Monday, where he was asked if there was any possible match that would get Lesnar to step back inside the Octagon after a potential UFC Heavyweight Championship fight with Daniel Cormier fell through.

“I hope he does return. I know he said he was retired, but I think the one fight he wants, and I don’t know if it will happen, but he wants to go up against Jon Jones,” Angle said. “I think that would be an extraordinary fight. They are very different. Their sizes are completely opposite, but Brock’s a freak. He might not win all of his fights, and he may not be the more polished fighter, but he is an incredible athlete.”

Jones, who is the reigning UFC Light Heavyweight Champion, caught wind of Angle’s comments and responded.

“He knows that’s what his friends want to hear, but he doesn’t really want this fight,” Jones wrote on Instagram. “Trust me.”

Brock is way too slow, I’ll embarrass him. https://t.co/rbg2Lfgpnw

“He’s done,” White told TMZ. “He’s made his decision. I don’t know where he is in that other world. I know he was looking at doing a new deal with Vince [McMahon] to stay with WWE. I’ve always had a good relationship with Brock. We’ve always dealt really well with each other.”

White followed up by saying he wasn’t disappointed by Lesnar’s decision.

“I wasn’t pissed at all,” White said during an Instagram Live interview. “Brock had a good run here. It’s been fun. In this business, you have to be 100 percent invested. You’ve got to be in. It’s not where his head was. He made the right decision.”

Instead of Lesnar, Cormier went on to fight former heavyweight champion Stipe Miocic at UFC 241 on Saturday. Miocic beat Cormier for the title via a fourth-round TKO.

With UFC off the table, Lesnar continued to work part time for the WWE. He captured the WWE Universal Championship for a record third time at Extreme Rules, then dropped it back to Seth Rollins on SummerSlam.