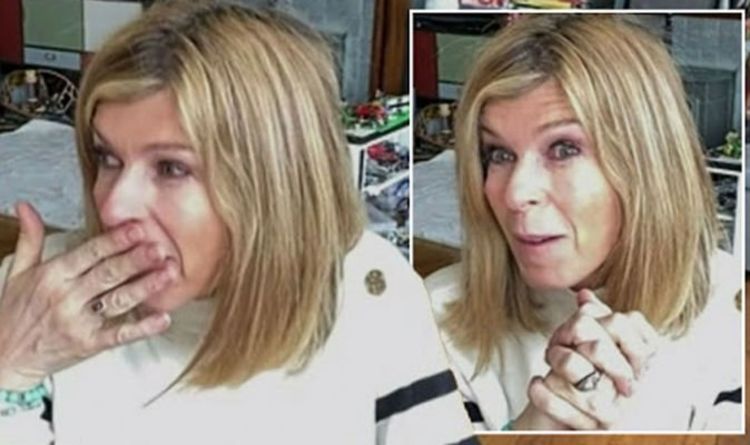 Kate, 53, joined her Good Morning Britain co-stars Ben Shephard, 46, and Ranvir Singh, 43, from her home to give the latest update on Derek’s, 53, condition. After being diagnosed with coronavirus last March and fighting for his life over the past 12 months, the father-of-two is now settled back into the family home which has been adapted to help his recovery. However, speaking on the ITV show just hours after welcoming her husband back into the fold, the beloved presenter was left crying as she expressed her joy of the family being reunited for the first time in over a year.

The broadcaster said: “[Derek] is responding all the time. What he’s not able to do is talk and say, ‘Why the hell is the place such a mess?’

“He is aware of where he is and there have been so many little, lovely moments. I was saying to him all the time during the coma, ‘When you get home, you can have one of my casseroles’.

“Which he loves, by the way, that’s not a threat because he can swallow a bit now but I said, ‘Let’s see if we can get you around the table with all four of us’.

“It makes me cry now,” she added with her colleagues in the studio seeing how important this moment was for their friend.

“And Darcey was saying, ‘Are you going to put four spoons down?’ and I don’t know, it just feels like the start of a huge chapter,” Kate explained.

“But a really, really big and important one,” the presenter said.

Taking to Twitter, those watching at home shared their jubilation of hearing about Derek’s return home.

One viewer wrote: “Such amazing news. Good to see you looking so happy. All the best. You’ve got him home now.”

Another posted: “Fantastic news. I Hope Derek makes a speedy recovery now he’s home, the best place for him with his family. Kate is such a strong woman for what she’s been through. So happy for the family.”

It was the couple’s children Darcey and Billy they saw first and Kate told her co-stars she could see the smiles on their faces from the window.

“They ran to open the door and he immediately burst into tears and there was a lot of hugging and then got him inside.

“He absolutely knew he was home,” she continued before explaining there will be challenges in the coming weeks and months.

The family will be receiving help from carers and medical professionals as Derek continues to make positive steps in his recovery.

“It’s not just help with looking after him, it is 24-hour care and I haven’t really slept as you can probably tell,” Kate said.

“That will ease off, it’s just I’m very aware at the moment and it’s a whole new team – he’s probably got used to the people caring for him in hospital.

“It’s a new team now who are working with him and helping him to come through so it’s going to take a lot of adjustment.”

Ending the interview, the journalist said she didn’t want to wake up her husband as he will still sleeping after making the journey home on Thursday.