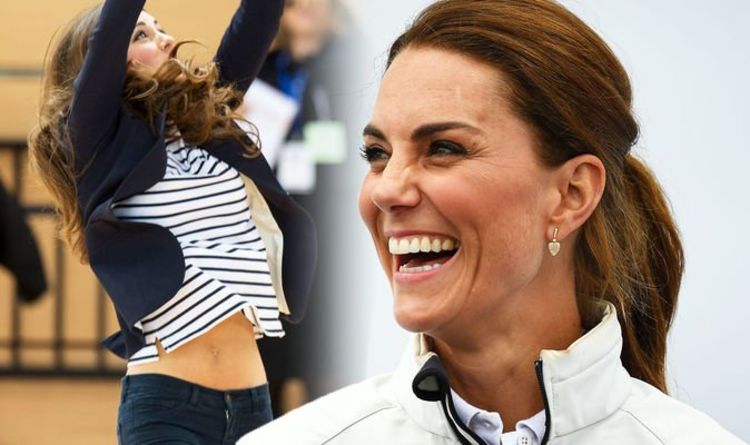 Kate Middleton has always been a big fitness fan, having played tennis and hockey as a youngster.

The Duchess is admired for her slim and tall figure.

Doubtless much of her enviable physique is down to genetics, but the Duchess is also known to live a healthy lifestyle.

This includes doing various different kinds of work out to stay in shape.

Kate Middleton most recently showed off her slim physique at the King’s Cup race.

Royals are incredibly lucky to have access to chefs and personal trainers, although hard work is always necessary to maintain a healthy body.

A lot of hard work is needed to maintain a perfectly flat stomachs, like Kate’s, especially after three children at age 38.

So how exactly does she do it? Kate is keen on running, which is key to a flat stomach.

Cardio is essential to shed fat, as no amount of sit ups can get rid of the layer of subcutaneous fat under the skin of the stomach.

An insider told the Daily Mail Kate runs as much as possible “sometimes with Charlotte in her buggy and their dog Lupo at her side.”

Many members of the public claim to have seen the Duchess running with her pram in the park at Kensington Palace.

Other types of cardio are also likely to be contributing to Kate’s flat stomach, as keeping the heart rate up in any way will do.

A source said: “The tennis court at Anmer has been the scene of many hard-fought matches, singles and doubles.”

Swimming is also on the cards too: “She and Pippa enjoy strenuous make-up-free aqua aerobic sessions and larky water polo with William and Harry.”

Another Kate Middleton weight loss exercise is the plank, an abs move.

According to the Mail, Kate also often does the plank for her stomach. It quoted a source who said: “It tightens her muscles.

“There are three elements, the basic plank, the side plank and the prone sky dive, all of which are positions Kate can hold for 45 seconds or longer and repeat at least ten times each.”

She is also said to use a Swiss gym ball, a large inflated piece of equipment, to train the abs.

How did Kate Middleton become a royal?

Kate Middleton, or Catherine, Duchess of Cambridge, was born on 9 January 1982 at the Royal Berkshire Hospital, Reading, England.

She was born to Michael and Carole Middleton, a former flight dispatcher and air hostess. The couple founded a party supplies company, Party Pieces, in 1987 – now estimated to be worth £30 million.

Kate has a younger sister Pippa Matthews, 34, and a younger brother James Middleton, 31.

Kate and her family moved to Amman, Jordan, in 1984, where the future Duchess was educated at an English-speaking nursery school.

After moving back to Berkshire the family sent Kate to private school, St Andrews School. She went on to briefly study at Downe House before moving onto Marlborough College where she boarded.

For university the young Kate attended the University of St Andrews in Fife, Scotland. Here she was awarded an undergraduate MA (2:1 Hons) in history of art.

Kate met Prince William when they were both studying at St Andrews, and both living in St Salvator’s Hall. Famously, William reportedly took a fancy to Kate after she wore a see-through dress during a fashion show.

In 2003 the couple began dating and lived together during their second year of university.

The couple split in April 2007, however, in October they were back together.

Prince William proposed to Kate Middleton with his late mother Princess Diana’s engagement ring in October 2010. The couple were holidaying in Kenya at the time.

On 29 April 2011 they married at Westminster Abbey with a whopping 26 million watching the event live.

Kate wore an Alexander McQueen dress worth a reported £250,000 on the big day.