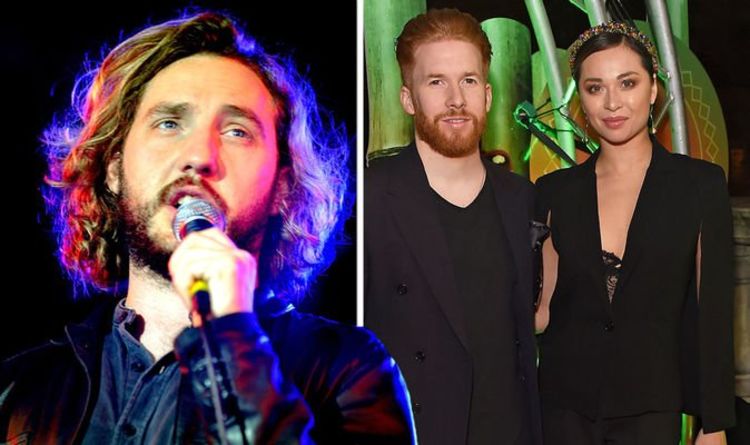 Back in October, Strictly Come Dancing star Katya Jones, 30, and Seann Walsh, 33, hit the headlines when they were pictured kissing on a night out in London together.

At the time, Katya was still with Neil Jones, 37, while Seann was also in a five-year relationship with his now ex-girlfriend Rebecca Humphries, 31.

10 months after the pair’s kiss, Katya and Neil took to social media to announce their break-up.

In a lengthy statement, they told their social media followers they have decided to separate, but remain good friends.

The former couple were together for 11 years and tied the knot in 2013.

Hours after announcing their split on Sunday, Seann made jokes about Katya during his set at the Edinburgh Fringe festival.

During his stand up show, Seann joked he had shared a hotel with Katya.

He was quoted as saying: “I was put in a hotel so the paps can’t find me.

“I get into bed and I ask Katya to pass me the remote.”

But, according to his representative the quotes are flippant and are part of a set he’s been performing for months.

A representative for Sean told Express.co.uk: “He’s been performing this material for over 6 months now and it’s all part of his show routine.

“Of course he wasn’t in a hotel room with Katya – this never happened.

“It’s just a joke ending to a section of the show he talks about having to be put up in a hotel the week after all this happened on Strictly.”

A representative for Katya also denied the pair ever shared a hotel.

She said: “I think this was a joke as part of Seann’s set? She didn’t share a hotel room with him.”

On his routines with the professional dancer on the BBC show, Seann reportedly added: “The buzz, it was like ejaculating.”

Seann was also quoted as saying kissing Katya felt like he was a snogging a “gay man’s wife”.

Following Katya and Seann’s kiss last October, the pair apologised for their antics on their separate Twitter accounts.

They also addressed their behaviour on Strictly: It Takes Two when quizzed by host Zoe Ball, 48.

Seann’s now ex-girlfriend later shared a lengthy statement on Twitter confirming she was no longer with the comedian.

Neil remained tight-lipped about the situation at the time, but later insisted the pair had moved on in various interviews.

Part of the Neil and Katya’s joint split statement read: “Hi everyone, as our fans and loyal supporters you are really important to us and so we wanted to let you know some news.

“After 11 years we have made the mutual decision to separate.

“We will always love each other, just in a different way as friends.”

Following the news of their split, many of their fellow Strictly Come Dancing pros commented on the news.

On both of the pair’s posts, Janette Manrara, 35, commented: “I love you @Mrs_katjones & @Mr_NJones tremendously!

“You are both beautiful people, talented, and wonderful friends!”