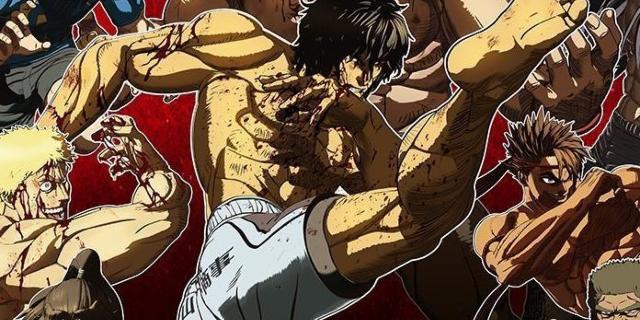 Netflix’s huge foray into anime production, licensing, and distribution have bore major fruits the last couple of years, and there seem to be no signs of stopping as its library of offerings is getting even bigger. One of the more surprising additions was for the anime adaptation of Yabako Sandrovich and Daromeon’s Kengan Ashura. This CG animated anime series found its audience when the first half of the series premiered on Netflix in July, and they have been waiting for the second batch of episodes ever since.

Luckily, Kengan Ashura announced on its official website that the second batch of episodes for the series’ first season will be debuting on Netflix worldwide on October 31st. This will be from Episode 13-24, so fans will be getting quite a full batch with the new update.

Kengan Ashura‘s anime adaptation is directed by Seiji Kishi (Danganronpa The Animation) for Larx Entertainment. Makoto Uezu (The Heroic Legend of Arslan) is handling the composition for the series, Kazuaki Morita (Assassination Classroom) is designing the characters, and Yasuharu Takanashi is composing the music for the series. The opening theme is titled, “King & Ashley,” as performed by MY FIRST STORY, and the ending theme, “Born This Way” is performed by BAD HOP.

The first batch of episodes encompasses the first 12 episodes of the series, and fans have been waiting on pins and needles for the second half of the series as Episode 12 leaves it on a major cliffhanger. A huge tournament has just begun, and soon fans will see how it shakes out in October!

Kengan Ashura was originally created by Yabako Sandrovich, with illustrations provided by Daromeon, for Shogakukan’s Ura Sunday Comics in 2012. Although the manga came to an end in 2018, the series has continued with an official sequel titled Kengan Omega. The series was adapted into an anime for Netflix, and the first part of the anime released worldwide earlier this year. Netflix describes Kengan Ashura as such:

“Kazuo Yamashita is an ordinary fifty-six year old man who one day is summoned by the chairman of his company and hired as a gladiator. He learns that these hired gladiators engage in battles called “Kengan Matches: to protect the corporate rights of the businesses they represent. Kazuo Yamashita is assigned to battle a mysterious Kengan fighter named Ohma Tokita. Both men join the “Kengan Zetsumei Tournament” with the hope of winning the spot as chairman of the Kengan Organization.”