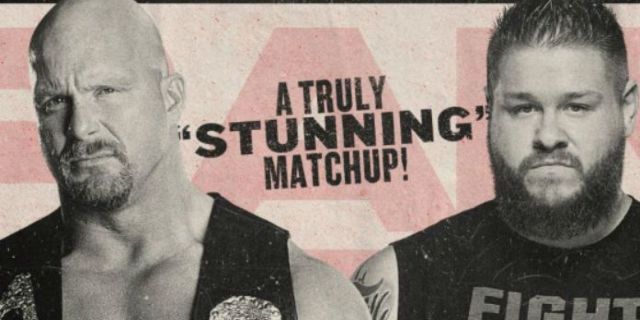 Between his usage of the Stunner and his ongoing feud with Shane McMahon, Kevin Owens has been getting plenty of comparisons to “Stone Cold” Steve Austin ever since he turned babyface.

Owens has stated numerous times in the past that he grew up as a big fan of Austin’s, but in a new interview with Sporting News he gave his honest thoughts on being compared to the WWE Hall of Famer.

“It’s flattering when I see people that are kind enough to make that comparison, but I obviously would never compare myself to him because he’s the biggest superstar of all time and I am not and I don’t think I ever will be,” Owens said. “I would never be arrogant enough to pretend like I’m worthy of that comparison. I’m just a guy who loved ‘Stone Cold’ and needed a new finishing move at one point and I asked Steve if I could use it and he said yes. He was happy to say so. He said ‘Please do, no problem.’

“Now, I’m lucky enough to be able to use it and I reap the benefit of that,” he added. “It’s a great finishing move that you can hit on everybody. I lucked out because I was the first one who thought of asking the master if I could use it and he said yes and now I get to do it. I’m not trying to be the next ‘Stone Cold.’ Nobody is ever going to be the next ‘Stone Cold.’There will only be one ‘Stone Cold’ Steve Austin.”

Owens first broke out the Stunner in early 2017 in a match against Roman Reigns. Austin famously tweeted afterwards that he felt he needed to teach Owens the ins and outs of the finisher, which led to an entertaining interview on The Steve Austin Show.

“I stay on top of what people think,” Owens said. “I read mostly positive reactions to me using the Stunner, but there’s still some people who say ‘That’s Stone Cold move, how dare he use it’ and all this stuff. For those people I say, I’m well aware of whose move it is and I’m never going to claim that it’s mine.

“That’s why I still call it the Stunner,” he added. “I’m never going to try and change the name or anything like that. I’m just somebody who grew up a huge wrestling fan and now I’m lucky enough to be using the most iconic finisher of all time. And I don’t plan on stopping any time soon.”