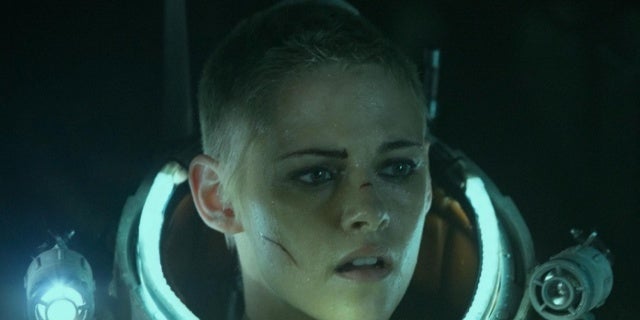 Stewart plays Norah, a member of an underwater research crew forced to scramble to safety when an earthquake devastates their subterranean lab.

“It’s a really dark, scary meditation on isolation. Basically, it’s like a survival movie about a bunch of people that don’t know each other, and the strange, occasionally existential conversations that ensue, and the weird relationships being formed really quickly,” Stewart told EW. “The underlying story of [disrupting] something that really should be left in its natural state, and what you can unearth — that’s what keeps it scary.”

Stewart is “stoked” Underwater, which was filmed in early 2017, is finally headed to theaters in January.

“I haven’t made a movie of this scale maybe ever. It was not an easy movie to make — really long and just drippy and cold and f—ing hard,” Stewart said. “I want to see how we all reacted in such precarious circumstances. It really pulls out the best and worst parts of people.”

The shoot proved challenging for Stewart and her co-stars, a cast that includes Jessica Henwick (Game of Thrones, Iron Fist) and T.J. Miller (Deadpool, Silicon Valley).

“The suits were really heavy, honestly. We couldn’t move around. I really don’t like being held down, I don’t like confined spaces, I’m not a strong swimmer,” Stewart admitted.

“The reason that, like, huge f—ing surly dudes who typically do action movies do them is because they’re actually really hard and scary and they hurt. I think none of us in the movie — except for maybe Vincent [Cassel], who’s, like, a f—ing wild banshee — really knew what we were getting ourselves into. And that’s where there’s some comedy in the movie every once in a while; in the most dire situations you kind of laugh in a funeral. That’s kind of what it felt like to make the movie as well. Like we were all dying!”