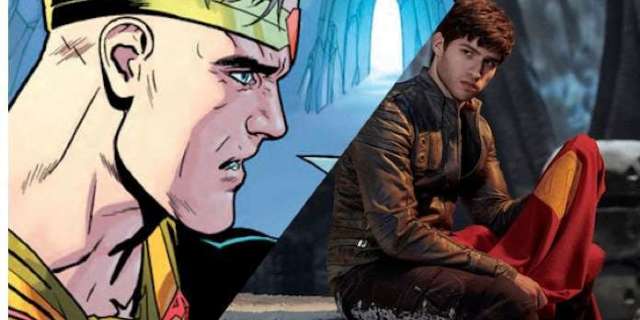 Last week, Krypton was cancelled at SYFY, and while it may not be entirely over — reports are both it and the Lobo spinoff it was to have spawned are looking for a new home — executive producer Cameron Welsh gave fans a taste of what the third season would have started like, it if had gone forward as planned. In what looks like the first page of the season three outline, Welsh shared that Krypton would have moved to the present day in season three after two seasons set in the distant past — and that Jor-El would have been, as Brainiac had planned, a godlike force.

In the scene, a young man living in Russia in 2020 is introduced, and then gradually revealed to be a bully — and then super-powered — and finally Jor-El. Brainiac would have appeared as Blake Ritson out of his green makeup, and been serving as a father figure to young Jor. This was the continuation of one of a handful of dangling plot threads from the show’s second season — that Brainiac had kidnapped baby Jor-El and was bringing him through space. The season likely would have included him being hunted down by Lobo, Seg-El, and Adam Strange. That story may be resolved even if Krypton does not return, since Warner Bros. is still reportedly developing Lobo for release on another platform.

I might get into trouble for this… But here’s the teaser for what would have been the first episode of season 3 that @LukeKalteux and I cooked up… https://t.co/Rdqx9sUDVa pic.twitter.com/s5fsD3W8FF

Krypton took place 200 years ago, and centered on the character of Seg-El (Cameron Cuffe), Superman’s grandfather. In the first season, Brainiac threatened the city of Kandor on Krypton, but was turned back when Seg teamed up with General Dru-Zod (Colin Salmon), who turned out to be his son from the future. Seg’s other son, Jor-El (who would go on to be Superman’s father), was born during season two, meaning that at one point Seg would have had a child with both of his two love interests on the series, Lyta-Zod (Georgina Campbell) and Nyssa Vex (Wallis Day).

Krypton ran for two seasons on Syfy. While it looks for a new home, the first season can be found on the DC Universe app and the second season can be purchase from video on demand providers like Vudu and Amazon, or streamed for free on Syfy’s website.