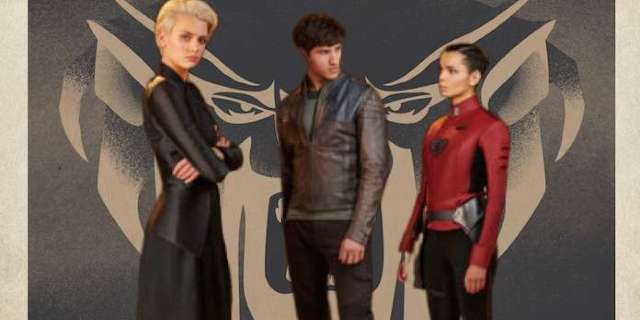 Krypton showrunner Cameron Welsh took to Twitter this morning to confirm for fans that the plans for the series’ now-cancelled third season would have seen the story follow the events of a war between Rann and Thanagar, and that the Omega Men would have played a role. While that may have seemed obvious from watching the last few minutes of the Krypton season 2 finale, a significant number of fans assumed that the omega emblem on the outside of a cave meant that Darkseid was nearby, and that the winged figures flying overhead in that same scene were likely Parademons from Apokolips.

This was the theory we went with in the hours following the finale, especially since the Omega Men made a lot of sense as characters to add to the series. The cosmic team of oddballs starred in the book that gave Lobo his first appearance in comics, and producers and cast members had teased the idea of The Omega Men appearing on Krypton more than once in the two years the show was on the air.

“Our show takes place in a fully realised DC Universe,” series star Cameron Cuffe said last year. “The Justice League, The Omega Men, The Green Lantern Corps…these things are all very real in the world of our story.”

Thanagar also presumably set up the appearance of Hawkwoman, who was supposed to appear along with Adam Strange in the show’s first season but who was removed from it before it ever premiered because the show’s short season orders made it difficult to introduce a lot of characters with heavy mythology.

Thanks for the reminder. I saw the speculation online and wanted to clear up. It was a squad of Thanagarians that Nyssa saw. She was on a Thanagarian occupied Rann, and we would have gotten heavily into the Rann/Thanagar war, with The Omega Men (not Darkseid) the wild card. Sigh. https://t.co/slgb8biMPc

In the comics, both Thanagar and Rann are located in Space Sector 2682, making them pretty close together, at least relatively speaking (Earth and Krypton, for example, are in the same sector). The two have been in an almost-constant state of war for decades, which likely explains the presence of burned people on the surface of the planet, who indicated to the sky when Nyssa asked about Rann. Part of the reason Rann and Thanagar constantly find themselves in conflict is that they are so close that you can often see one planet from the other with the naked eye.

In the early hours of yesterday moring, Welsh — who had been moving his house when the cancellation news broke wide — took to social media to thank the fans for their support and talk a little bit about what might have been.

Krypton took place 200 years ago, and centered on the character of Seg-El (Cameron Cuffe), Superman’s grandfather. In the first season, Brainiac threatened the city of Kandor on Krypton, but was turned back when Seg teamed up with General Dru-Zod (Colin Salmon), who turned out to be his son from the future. Seg’s other son, Jor-El (who would go on to be Superman’s father), was born during season two, meaning that at one point Seg would have had a child with both of his two love interests on the series, Lyta-Zod (Georgina Campbell) and Nyssa Vex (Wallis Day).

You can find the first season of Krypton on the DC Universe app, and the second season on syfy.com. Keep your eyes on ComicBook.com for details on when to find the second season on home video and streaming services — and for the official word on whether the show will find a new home for a third season, or for the planned Lobo spinoff series.