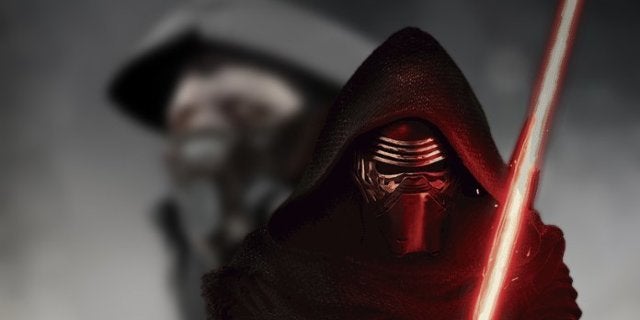 For all the fan debates about how the new Star Wars sequel trilogy is shaping up, most fans agree that Adam Driver’s Kylo Ren has been a nice addition to the saga. Kylo Ren instantly grabbed fan attention when the design for his Darth Vader-inspired helmet and armor first appeared online, during the days before The Force Awakens‘ release.

“Very early Jedi Killer/Kylo concept. Wasn’t used in Star Wars : The Force Awakens but ended up being the inspiration for the Fifth Brother in Star Wars Rebels.” –Christian Alzmann

Christian Alzmann is the concept artist and art director who works with Lucasfilm, and he shared this version of Kylo Ren’s design, along with a whole host of other character designs he did for Force Awakens. Clearly, this version of Kylo Ren was one that has as much in common physically with Darth Vader, as he does thematically. While it’s a cool look that definitely looks like one of the creepier Star Wars villains we’ve ever seen, it’s a good thing The Force Awakens didn’t got with this design. The film already gets criticized for being too close in narrative to Star Wars: A New Hope; a villain who basically looks like Darth Vader with his helmet off at the end of Return of the Jedi would’ve made the two films virtual copy cats of one another. More to the point, explaining how Ben Solo ended up needing that respirator device would’ve been a whole different story that needed to be told.

In any event, Lucasfilm ultimately went with the design for Kylo Ren that we know and love, but this concept by Alzmann didn’t get thrown out entirely: after a few tweaks, this look was used for “Fifth Brother,” a member of the elite hunters known as “The Inquisitors,” who hunted down the remaining Jedi in the early days of the Galactic Empire. In one of the better story arcs from the Star Wars Rebels animated series (season 2 finale), Fifth Brother and other Inquisitors battle Darth Maul and Jedi survivors Kanan Jarrus, Ezra Bridger, and Anakin Skywalker’s former padawan, Ahsoka Tano. Check that out if you haven’t.

Kylo Ren will be back for the final chapter of the Skywalker Saga, Star Wars: The Rise of Skywalker, on December 20th.