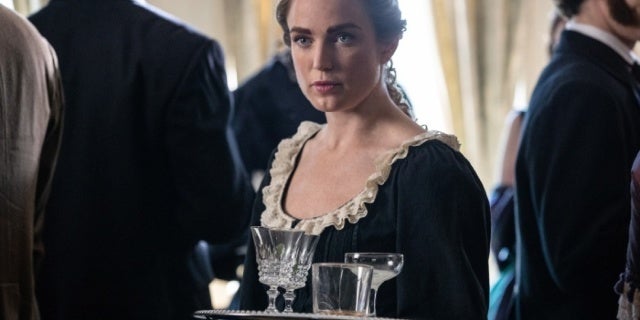 We still have to wait a few months to see Legends of Tomorrow‘s fifth season, but we have an amusing new idea of what to expect within the new episodes. On Monday, showrunner Keto Shimizu took to Twitter to reveal the title page for Season 5’s fourth episode, which will be titled “A Head of Her Time”.

While there’s no telling what this title could be referencing, the pun of the title has made some speculate that it could reference Marie Antoinette. The former Queen of France certainly feels like the kind of historical figure that would be fitting for Legends, especially now that they have a new threat to face. In Season 5, the team will be dealing with the various dead historical figures that Astra Logue (Olivia Swann) released from Hell in the last season finale.

“In the finale, we are going to see a terribly nuanced version of Astra.” showrunner Phil Klemmer told ComicBook.com at the time. “She, unlike most people in Hell, isn’t going to appear evil through and through. Should we have the chance to continue the story next season, there’s a flipside to the coin of this girl — now woman — who resents him and had been corrupted by her experience. She blames him for everything that went wrong in her life. Again, I feel like there’s a chance to get underneath all that. For us, it’s just always about revealing new sides of these characters that you think you know inside and out.”

“I never would have thought that John Constantine would fit in with the Legends and onboard the Waverider, but I think for next season, we want to keep digging deep on this guy, because obviously he feels pretty bottomless.” Klemmer added. “He’s a bottomless pit of darkness, but also, there’s no end to the pathos and the tragedy. There is such a pure impulse to what John does. Beneath all the self-loathing, he’s such noble man. I guess that’s why we keep wanting to know what happens next, because it’s like he’s endlessly fascinating.”