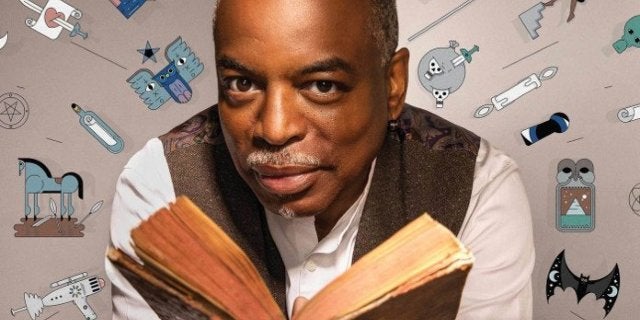 LeVar Burton inspired a generation of readers as the host of the educational television series Reading Rainbow from 1983 though the show’s end in 2006. It remains one of PBS’s most popular and longest-running series ever. In 2017, Burton teamed with podcast distributor Stitcher to launch LeVar Burton Reads, a podcast that sees the actor and director once again reading to an audience. This time, instead of children’s books for young readers, Burton is reading some of his favorite short fiction aimed at adult audiences.

Burton is headed to the Keystone Comic Con in Pennsylvania this weekend. Ahead of the event, he spoke to ComicBook.com over the phone and discussed his goal for the podcast.

“If I had a mission statement for LeVar Burton Reads, it would be to remind the Reading Rainbow generation how important reading is in their lives, and their imaginations,” Burton says. “I guess more than anything else that’s the message that I want. I want people to engage with their imaginations, with these stories. Because, especially as adults now, you guys are adulting. I don’t want you to stop using your imaginations because you’re going to need them going forward. Because there’s a whole lot of shit we’re leaving for you to clean up. I’m sorry about that. I apologize, but I am trying to encourage some of the skills and talents you’re going to need going forward.”

LeVar Burton Reads returned in August for its fifth season. The season begins with Burton reading “The Simplest Equation” by Nicky Drayden, a short story about two young women – one human, the other alien – who fall in love at school. After finishing the story, Burton discusses on the episode how he was worried he wouldn’t be able to do justice to the romantic story. He also says he’s often a little worried about living up to the great fiction he reads, but that its never come to the point that he’s backed away from reading a story.

“There’s already so much constricture on story selection that I face constantly because we’re looking not only for great stories from a diverse field of authors, we’re looking for a story that I could read in a half an hour or 40 minutes,” Burton explains. “That eliminates a lot of amazing literature. Sometimes, not every season, but I think twice now in five seasons we’ve done a two-parter. Only twice. I try not to reject anything that is a genuine candidate for me. At the end of the day, the barometer for me is, ‘Do I feel like I can do it justice by reading it aloud? Is there something that I can bring to this story? Is there something on the page that I feel like I can use to interpret my way and deliver to an audience of listeners?’ That’s the barometer. That’s the litmus test for me, how it strikes me as a piece of performance art.”

Burton wouldn’t spoil what other stories are on the way during this season of LeVar Burton Reads. He did reveal some other surprises in store for listeners.

“I like to keep it a surprise,” Burton says of upcoming stories. “I will say that this season I’m excited about some of the bonus content because I’m not touring this year, with this season, either. Maybe another year or so before I’m able to get back out on the road with the podcast tour. The bonus episodes that I’m doing for the premium side, which will eventually make its way into the feed, are interviews with friends of mine where they have suggested a story that we both read. I’m going to invite the audience to read that story in advance of our sit down conversation. I’m doing this with Aisha Tyler and Rob Delaney and Lawrence Fishburne and Brent Spiner and Jesmyn Ward. I’m really excited about those conversations with those five people and sharing those conversations with the LeVar Burton Reads audience.”

Keystone Comic Con takes place August 23rd through August 25th at the Pennsylvania Convention Center. LeVar Burton will be available for photos, autographs, and panels on the Saturday and Sunday of the convention.