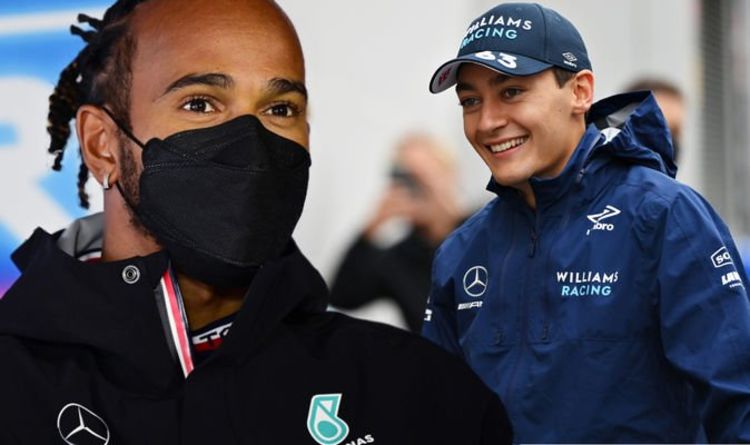 Lewis Hamilton has spoken glowingly of George Russell as the Formula One prospect looks to be edging towards Mercedes’ second seat for next year. Hamilton’s current team-mate, Valtteri Bottas, has been put through fierce speculation around his own future, although a move to Alfa Romero now seems his most likely next step.

The Finn has been widely touted as Kimi Raikkonen’s replacement at Alfa Romeo, with the veteran having confirmed he will retire at the end of the season.

That would leave space for Russell to make the jump up from Williams to Mercedes, a move which has been rumoured for some time.

Russell has already raced for the Silver Arrows, putting in an admirable performance when deputising for a Covid-stricken Hamilton in Bahrain last year, only for a pitstop malfunction to dash his hopes of victory.

The 23-year-old notched his first F1 podium last time out in Belgium, with relentless rain ensuring an unorthodox afternoon as drivers had to settle for half points based on their qualifying positions after just two laps of non-competitive racing.

Previous reports from Sportsmail had suggested that Russell’s switch to Mercedes had gone down ‘like a lead balloon’ in the Hamilton camp, but the seven-time champion’s latest press conference suggests quite the opposite.

Speaking ahead of the Dutch Grand Prix, he said: “I honestly think it will be good. I think George is an incredibly talented driver, clearly.

“I would say probably the only highlight from last week [at Spa] was his qualifying lap, it was amazing.

“I think he’s humble, I think he’s got a great approach, naturally being British I would imagine probably helps, in terms of communication.

“He’s the future. He’s one of the members of the future of the sport.

“I think he’s already shown incredible driving so far, and I’m sure he’s going to continue to grow, so where better to do it than in a great team like this?

“If it does turn out that I’ve got a new team mate, I’m in a different place in my life. I’m excited to see the youngsters coming through.

“It’s not that I want to lose to a youngster, naturally, but I’m excited to see the progression of the sport, because I am a fan of the sport, at the end of the day.”

Hamilton’s ringing endorsement will be a welcome ego boost for Russell, who already has cause for celebration after his podium at Spa.

Earning that second place on a partial-technicality, however, is perhaps not how the youngster would have envisaged such a special moment on paper.

Undoubtedly, if he did complete his long-awaited switch over to Mercedes, his chances of regular podium appearances would go through the roof.