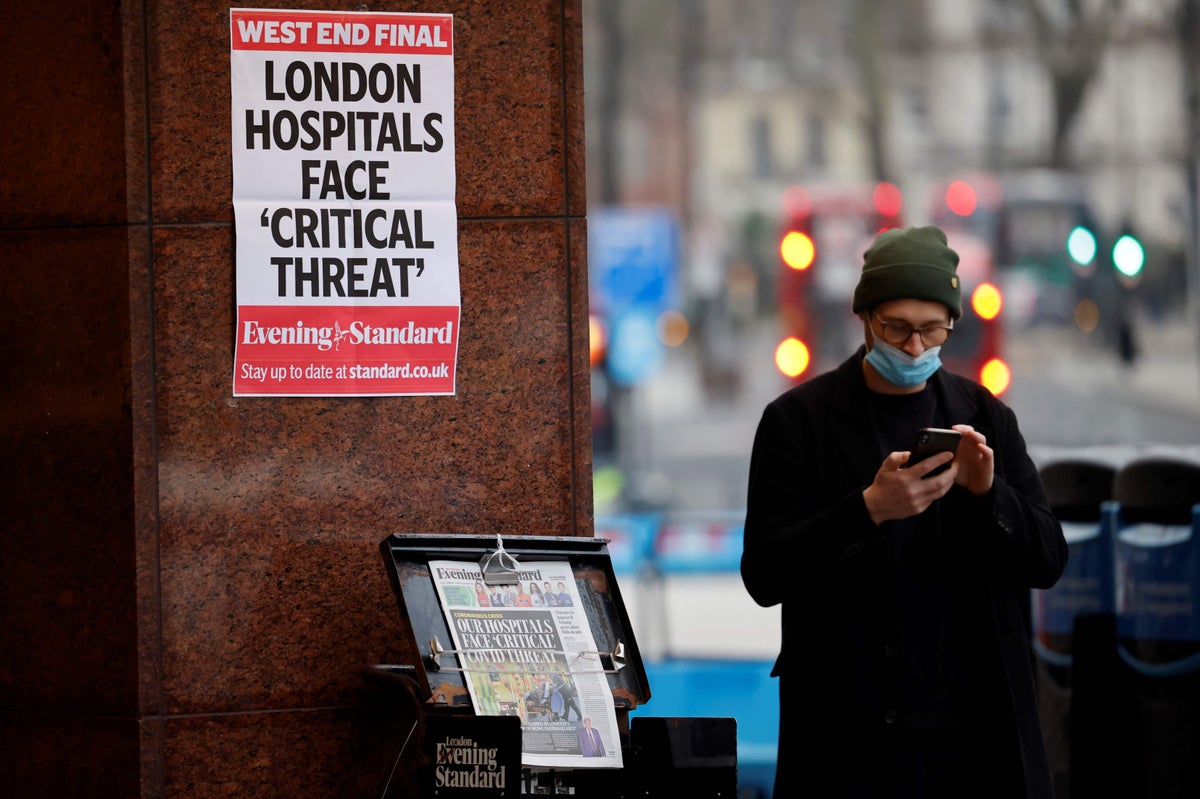 ondon has seen a significant drop in its rate of coronavirus infections, new figures show, in the clearest sign yet that tough lockdown restrictions are starting to take effect.

The capital’s rate of new Covid-19 cases stood at 864.9 per 100,000 people in the seven days to January 10, according to Public Health England’s latest weekly surveillance report.

However, the city remains England’s Covid hotspot, as it continues to suffer the highest infection rate of any region.

The other regions recording a week-on-week fall are the East Midlands, eastern England, north-east England, south-east England and Yorkshire and the Humber.

The latest figures come as one of the UK’s most senior epidemiologists said the raging wave of infections across the country is starting to subside.

Professor Neil Ferguson, whose early modelling of the virus made him a key player in the first national lockdown, said he thinks the current surge in cases may be coming under control in some regions.

In an interview with BBC Radio 4’s Today programme, Prof Ferguson said: “I think it’s much too early to say exactly when case numbers are going to start coming down, but in some NHS regions in England and in Wales there’s sign of plateauing.”

London in particular is seeing a drop in the number of positive coronavirus tests, alongside the South East, he said.

“At the moment, it looks like in London in particular, and a couple of other regions – the South East and East of England – (that) hospital admissions may even have plateaued, though it’s hard to tell they’re coming down.

“It has to be said this is not being seen everywhere.

“Both case numbers and hospital admissions are going up in many other areas but, overall, at a national level we’re seeing the rate of growth slow.”

Prof Ferguson, who is director of the Medical Research Council’s Centre for Global Infectious Disease Analysis at Imperial College London, said he would expect to see case numbers “continue to come down slowly at a national level” but with regional variations.

Asked how many more weeks of rising hospital admissions and deaths the UK could be looking at, he said: “It critically depends on whether the lockdown we’re in the moment will actually control growth in all areas.

“But I would hope that hospital admissions might plateau, instead of keep going up, some time in the next week.

“Hospital bed occupancy may continue to rise slowly for up to two weeks and deaths maybe even for longer.

“We’re going to be well over 1,000 deaths a day, even measured by the date people die rather than the date deaths are reported, before numbers start coming down.”

Prof Ferguson said the total number of deaths in the UK “unfortunately is going to be well over 100,000, there’s nothing we can do about that now”.

Only about 20 per cent of the population has been infected so far, which had resulted in 100,000 deaths, he said.

“So we have to get to very high levels of vaccine coverage in those vulnerable groups before we can reduce the risk of having basically the same number of deaths again.

“If we only get up to 70 per cent coverage in the elderly, for instance, that still leaves 30 per cent unprotected plus everybody else.

“We can still get a very large epidemic, which unfortunately could kill many, many people, so what the modelling and all the analysis and all the groups feeding into Sage (Scientific Advisory Group for Emergencies) says is, we need to be very cautious in how we relax restrictions and try to ensure we get as high a vaccine coverage as possible.”

Asked if there could be restrictions for many months to come, he said: “Yes, and we can’t predict all of these things in advance.

“We couldn’t have predicted this new variant coming up, but the new variant without doubt will make the relaxation of restrictions more difficult because it is substantially more transmissible.

“So it will be a gradual process to the autumn.”

Prof Ferguson suggested that the requirement to isolate after coming into contact with a person with coronavirus could be relaxed for people who have recently had the virus, such as NHS workers, but said this was “a question for policymakers”.