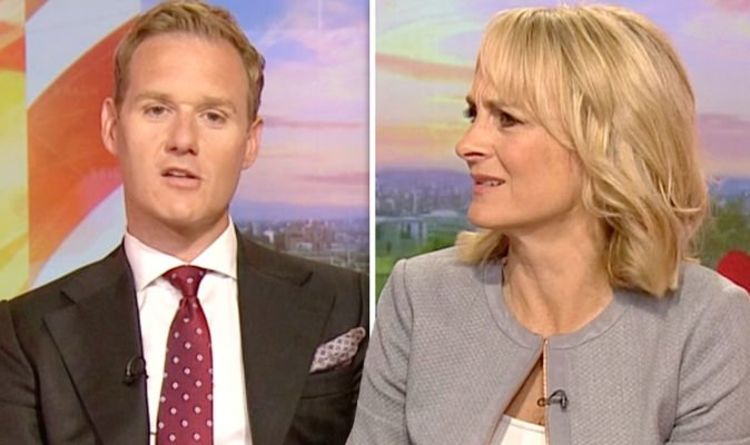 Louise Minchin, 51, beat Dan Walker, 42, at a charity golf match on Monday, regardless of him being a eager golfer. Having known as the victory an “unexpected bonus”, the presenter joked Dan was nonetheless peeved about shedding once they bought collectively to host yesterday’s BBC Breakfast. Uploading an image of the pair of them with information reporter Holly Hamilton, 32, on set, Louise instructed her 164,000 Twitter followers: “Good morning all, the weather is miserable this morning, I think we should declare it a duvet day.” The snap confirmed Louise and Holly trying cheerful, whereas Dan appeared barely grumpy, hiding the decrease half of his face behind his script.

“I think Dan is still miffed about the trophy…” one BBC Breakfast viewers commented on the publish, to which Louise replied: “Deffo.”

Earlier this week, Dan knowledgeable his personal 575,000 Twitter followers Louise had received the charity occasion, quipping: “Borrowed golf equipment and sneakers, she hit a tree and went in 2 bunkers on her first gap however SHE WON!

“@louiseminchin may be very pleased after my @SheffChildrens golf day at @hallamshiregolf and is kind of eager to speak about it,” he jibed playfully.

He later shared a shot of himself and Louise, who was clutching the golf trophy, including: “Thank you a lot to everybody who supported @SheffChildrens charity gold day at @hallamshiregolf at this time.

“So many individuals to thank however most superb information is… LOUISE went and received it! Unbelievable stuff.

Meanwhile, Louise tweeted: “Unreal. My team were fab, I just managed to hang on in with them with my borrowed shoes and clubs!”

She additionally joked she would “never” let Dan overlook how she had overwhelmed him at his beloved sport.

The pair have labored collectively on BBC Breakfast since Dan changed Bill Turnbull, 63, in 2016.

In the midst of celebrating her huge win this week, Louise Minchin additionally had an all-time “first” with Dan Walker.

Commenting on a Twitter image which confirmed her and Dan posing with the trophy, a viewer requested: “Did you get a congratulatory hug from Dan or was it a brisk handshake?”

Despite the very fact they’ve labored collectively for a number of years, Louise defined her victory had led to their first ever hug.

“We actually hugged!” she replied. “World first that too.”

Louise has been a daily presenter on BBC Breakfast since 2006.

In 2012, she was promoted to one of many present’s fundamental hosts alongside BBC favorite Bill.

BBC Breakfast airs every day at 6am on BBC One.