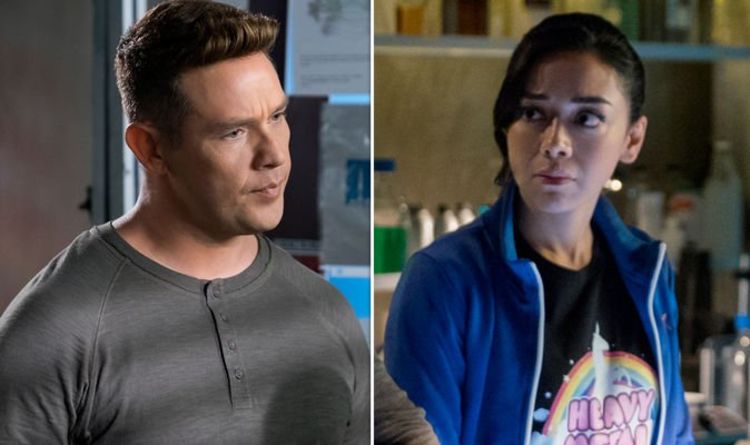 Towards the end of last season, the pair shared an unexpected kiss, but the series ended leaving many questions unanswered.

Viewers were baffled by the new development as the two characters hadn’t shared a lot of screen time together.

However, fans are now left wondering if romance will blossom in season five of the Netflix hit or if all will be forgotten.

In conversation with Assignment X, Dan star Kevin Alejandro opened up about the key scene, revealing he was as much in shock as the fandom when the script arrived.

Kevin said: “Not at all. Did not see it coming at all.

“It’s funny… Aimee and I were doing a scene I think an episode or two before that episode came out.

“In one scene, I was like, ‘Maybe I give her a little peck on the cheek, a little brotherly thing.’ And one of the writers said, ‘No. Don’t do that. We have ideas. Something else is going to happen in the future.’

Speaking out about what showrunners Ildy Modrovich and Joe Henderson have planned, the actor revealed he still remains in the dark of the future of Dan and Ella, but the star hinted at a hopeful future for the pair in light of the fandom’s backing.

READ MORE: Lucifer season 5: Chloe and Lucifer to break up in plot twist?

He added: “I think he’s completely confused. But I don’t really know.

“Joe and Ildy are really good at keeping their own secrets.

“I have no idea where they’re going to take it. I know that a lot of the audience really enjoyed the chemistry that Aimee and I had, so who knows?

“I don’t know if they’re going to explore that further, or if that’s it.”

The star spoke out after Fans speculated Lucifer’s twin brother Michael could arrive in the next outing.

Reddit user HankMoodyMf said: “I do think we will eventually see Michael, I think they are saving him and Azreal.

“I am really interested in seeing the show’s version of Michael, because instead of Michael being god’s number one angel, here it’s Amendiel.”

Another fan theorised the twin brothers would likely have “awesome chemistry” if he joined the show.

Madacpg22 began: “I really hope they introduce Michael, he’s Lucifer’s opposite and THE warrior angel and he and Lucifer could have an awesome chemistry.”

Lucifer season four is available to watch on Netflix.