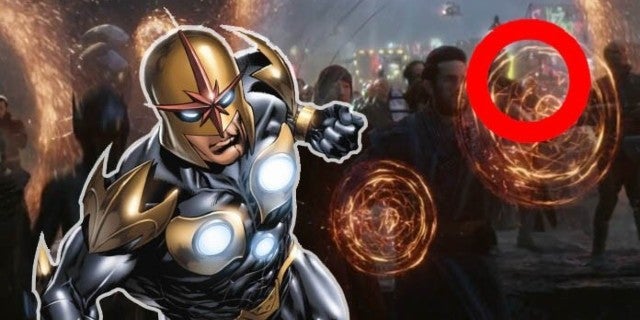 On Monday, the directors of Avengers: Endgame made a hot claim: Richard Rider is in Avengers: Endgame as Nova. The character with Xandarian origins was never featured front and center in a shot but Joe Russo claims he was “in the background” of the crowded battle against Thanos. Whether or not this is a joke remains unknown but it has Marvel fans scanning every shot from Endgame for Nova’s first appearance in the Marvel Cinematic Universe.

“Look closely at that scene again and you will see. You will see Richard Rider in the background of the shot. Easter egg,” Joe Russo said in a video with Wired. Well, fans are following his instructions.

The Marvel Universe fandom has come together on Twitter, as if they are Peter Parker working for J. Jonah Jameson, and trying to get pictures of this super hero. Some of the theories are below…

Could that gold mask on the right be him? pic.twitter.com/OYD4n1WR1p

It looks like Nova might be hanging out in the crowd as the entirety of the Avengers heroes are assembling to take on Thanos. The image, however, is not in HD so it’s hard to tell.

The below shot seems to debunk the above shot with a more clear picture, assuming this is the same location from a different angle. The would-be Nova might just be a Ravager.

Another fan thinks Nova might be hidden the back of the army. It’s tough to tell through the magic shields but this figure might have the Nova armor on.

A closer shot backs the possibility with what looks like it could be the Nova helmet.

Closest thing I could find pic.twitter.com/BPJrybKOjV

Charging beside Captain America? Could that be Nova? Again, it’s hard to tell when zooming into the scene so tightly as the image becomes grainy.

I thought this thing behind valkyrie was pepper but it looks too golden at the front (gold helmet?) and has something seperating off its back… a cape? 😉 pic.twitter.com/kRIpRA2XSV

Another shot sees a couple of figures flying behind Valkyrie. The most likely scenario, though, is that those figures are actually Iron Man and Rescue.

There he goes cutting in behind Ironman before Him and spiderman share a hug??? pic.twitter.com/pX24W0TcQq

If Nova really is in the scene, he’s probably moving quickly through the chaos. Some think they have spotted Nova flying through the background of a couple shots. Above, he would be behind Iron Man.

Below, others think he might be riding a Cosmic Space Bike into battle.

Yo, if Nova IS in #AvengersEndgame, he’s def riding in on one of those dope space bikes, Cosmic Ghost Rider style. pic.twitter.com/TlYg04OVfv

One shot definitely has Nova in it, thanks to the photoshop of Brittany Mercer.

Do you think you’ve spotted Nova in Avengers: Endgame? Send your screenshots to me on Instagram or Twitter.

Avengers: Endgame is now available on blu-ray and digital downloads.