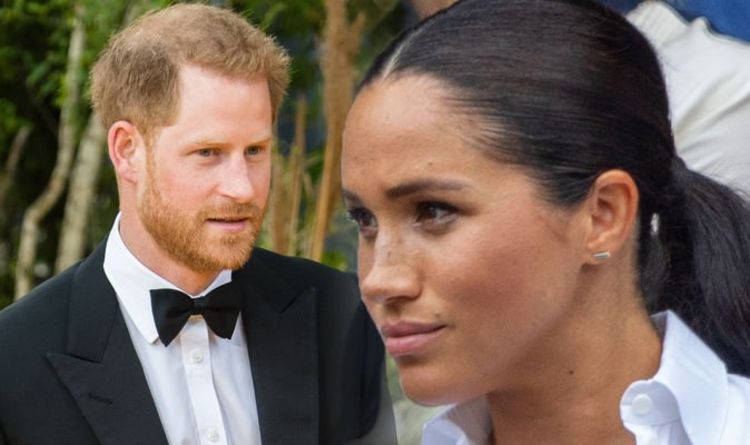 Meghan Markle and Prince Harry have faced criticism for their recent jet-setting across the continent.

They went to Ibiza to celebrate the Duchess of Sussex’s 39th birthday and enjoyed a couple of days in the Balearic sunshine.

However, they endured backlash as they chose to fly via a private plane, with many criticising their “carbon footprint” on this occasion.

Christine Lampard, who was filling in for Lorraine Kelly today, caught up with Royal expert James Brookes to discuss the latest news.

Talk turned to their flying habits, as the commentator said: “We saw the photos of them getting off the plane and if we break it down to what they’ve taken, so earlier this month, they took a trip to Ibiza for Archie’s first holiday as a family.

“It was to celebrate Meghan’s 38th birthday. They spent around, just under, a week there – nice, luxurious villa.

“Then they come back, and they take another private jet to Nice in the south of France.

He added: “Now,  it’s one of those where it’s not necessarily an issue if you’ve got the name and the status to do it.

“Unfortunately for these two, they’re telling people, ‘Well, cut down your carbon footprint and try to be more environmentally friendly’. And then they’re pictured on these huge jets where the carbon footprint is massive.

“But these two want to almost have their cake and eat it,” James concluded.

READ MORE: ‘Back off Meghan Markle’ Denise Welch rips into Piers Morgan over treatment of Duchess

The jet is thought to have cost around £20,000 to hire and is said to create seven times more carbon emissions per person than a commercial flight.

Harry had previously said people had been “far too slow in waking up” to climate change and urged people to take action.

“It comes weeks after Harry had a conference in Siciliy where he tackled climate change.

“It’s a bit of a PR nightmare,” the expert concluded.

Meanwhile, Labour MP Teresa Pearce has hit out at the couple, telling them to “lead by example”.

According to Metro, she said: “Given the position they have taken publicly about being responsible on climate change, this does seem an anomaly which they should look at.

“It’s up to all of us to cut our carbon emissions, and the number of flights we take a year.”

He said it would be “hard” for the Duchess to return to acting, probably because of the logistics.

Kevin told Ross King: “Why? Because if you’re Harry, he seems like a great guy, it’s like, that’s why I’m not married to an actress, I don’t want to see my wife kissing somebody. I’m like on Harry’s side.

“I don’t want to be a person that’s every limiting somebody, but there’s so much thought that goes into taking on, number one being a wife, and then being in this circle that I don’t even understand – royalty – it’s a unique spot.

“I think we watch it from across an ocean and sometimes we don’t understand exactly what’s going on. She’s had enough attention for a lifetime now in a year.”

Lorraine airs weekdays on ITV at 8.30am.