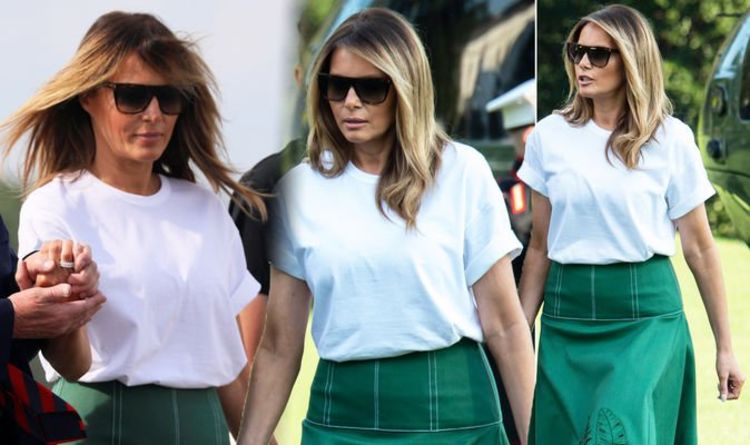 Melania Trump arrived home at the White House after a two week break with Donald Trump and their son, Barron Trump, 13. The US First Lady is usually dressed in glamorous outfits from her designer wardrobe but opted for a more casual look as she arrived in Washington. The former model has been enjoying some family time at Trump’s gold club in New Jersey and look refreshed as she returned home in a plain white t-shirt and emerald green skirt. Still dressing the look up a bit, she wore a pair of white floral Christian Louboutin heels.

Melania looked effortlessly chic as she arrived home wearing an oversized white t-shirt with the sleeves rolled up.

She tucked the top into a emerald green suede skirt as she was spotted holding hands with Donald.

The skirt pulled Melania in at the waist and was fitted around her hips with white stitching at the top.

The rest of the skirt was loose and had a leaf design on the front and around the hem.

Melania showed off her toned legs by keeping them bare and the skirt cut off just below her knee.

She dressed the look up with a pair of summery floral Christian Louboutin stilettos, with similar pairs on sale for £575.

The First Lady looked fresh faced and appeared to wear minimal make-up with a clear lip gloss and hid her eyes behind a pair of oversized black sunglasses.

She walked across the South Lawn of the White House and her thick locks were styled down with a loose curl.

The First Lady often picks outfits from her classy wardrobe and recently wore a chic black dress at the White House.

She dressed in a fit and flare midi dress as she paid her respects and to grief-stricken residents of El Paso and Dayton.

Melania matched the look with a pair of black stiletto heels and oversized black sunglasses.

She recently turned heads wearing a vibrant emerald green dress at an event at Kennedy Center in Washington.

Posting snaps on her Instagram account, the First Lady showed off her stunning figure in the belted midi dress.

The shirt dress had long sleeves which she partially rolled up and it had a full pleated skirt.

Melania let her dress take the focus and she wore some closed toe nude high heels.

Mum-of-one Melania can speak more languages than any other First Lady before her: English, French, German, Italian, Serbian and of course her mother tongue, Slovenian.

This also makes her the only First Lady whose first language is not English.

After Jacqueline Kennedy, Melania is the second First Lady who is a practising Catholic.

She met Pope Francis as part of a foreign tour with her husband and stepdaughter Ivanka last year.

Her skills aren’t confined to print, and she appeared in a commercial for Aflac, an American insurance company, in 2005.

Melania’s parents are Amalija Knavs and Viktor Knavs, and the couple live together in Washington.

She has one sister, Ines, who is reported to live in New York and work as an artist.

On May 7 2018, Melania launched her flagship campaign as First Lady, BE BEST, which The White House describes as “an awareness campaign focused entirely around the well-being of children”.

There are three main strands to the initiative: well-being, social media, and opioid abuse.