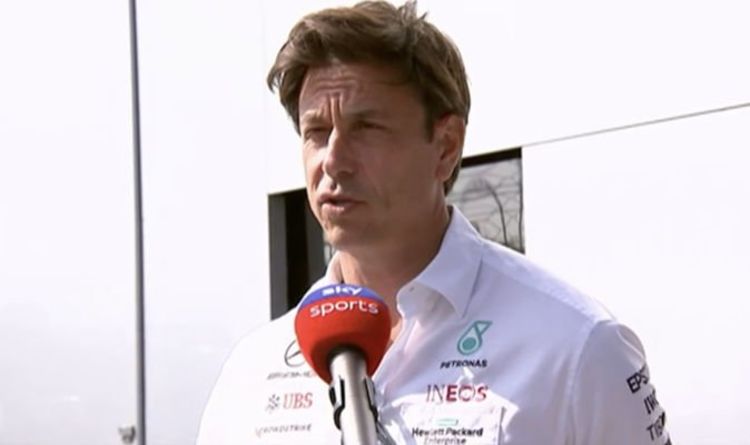 Mercedes team principal Toto Wolff has offered an update on the situations of George Russell and Valtteri Bottas, insisting the process is “not done yet” as the world of Formula One waits on an announcement. Both drivers know where their futures lie but the world champions still have paperwork to do it appears before confirming who will drive for them next season.

Russell is widely expected to get a promotion to Mercedes after three impressive years with Williams, having earned his first podium at the Belgian Grand Prix last weekend albeit amid unusual circumstances.

The 23-year-old Mercedes junior driver has long been tipped to contend for world championships in the future and will come in as Lewis Hamilton’s team-mate to improve the Silver Arrows’ chances of continuing to dominate the F1 grid even after the major 2022 regulation changes.

Bottas meanwhile is expected to be named as Alfa Romeo’s replacement for the retiring Kimi Raikkonen with his fellow Finn confirming he will call time on his F1 career later this year 20 seasons after making his debut in the sport.

Mercedes have yet to confirm their decision though meaning it is still possible Bottas could stay on alongside Hamilton with this currently his fourth season at Mercedes.

And Wolff insists not all the details are finalised as he was quizzed yet again on when his team will make an announcement on their driver line-up for 2022 onwards.

“Done means signed? No it’s not done yet,” Wolff told Sky Sports F1 in Zandvoort after FP1 on Friday.

MUST READ: Russell ‘set for Mercedes promotion’ with Bottas’ next move decided

“We know that you guys have been asking for all the right reasons but you also need to go through the process one step at a time and announce when there is something to announce.

“The process is to make sure that everybody is in a good place and that all contracts are signed.”

Wolff meanwhile thinks the tumultuous nature of Nico Rosberg and Hamilton’s off-track relationship during their three years together at Mercedes means the team are ready for all eventualities.

The Silver Arrows have enjoyed a harmonious atmosphere with Hamilton and Bottas together and a mix-up of their driver line-up threatens to potentially unbalance the team.

The Austrian continued: “All personalities are different and also the situation between the two team-mates is also the people and their past.

“I spoke to Prost about it and was learning on the job with Nico [Rosberg] and Lewis. If we were to run in a situation that we have drivers battling it out there then I think we can benefit from the learning.”

Russell confirmed on Thursday that he knows which team he will be driving for in 2022, saying: “[I was told] verbally, before Spa.

“As I said, I’m not going to sit here and lie and not say the truth; the truth is there’s nothing to announce. But as I said, I’m aware of the situation of where I’ll be racing next year and I was informed just prior to Spa.”

While Bottas said when quizzed on whether he knows about his future: “Maybe I do, maybe I don’t. I don’t want to say much more but yes, things are going in the right direction and I’m happy and excited.”

Hamilton meanwhile declared: “I think George is an incredibly talented driver, clearly. I would say probably the only highlight from last week [at Spa] was his qualifying lap, it was amazing.

“I think he’s humble, I think he’s got a great approach, naturally being British I would imagine probably helps, in terms of communication.

“He’s the future. He’s one of the members of the future of the sport. I think he’s already shown incredible driving so far.

“I’m sure he’s going to continue to grow, so where better to do it than in a great team like this, or whatever team he goes to?

“If it does turn out that I’ve got a new team=mate, I’m in a different place in my life. I’m excited to see the youngsters coming through.

“It’s not that I want to lose to a youngster, naturally, but I’m excited to see the progression of the sport, because I am a fan of the sport, at the end of the day.

“You’ve heard me earlier on in the year talk about Lando [Norris]. It’s encouraging to see these youngsters come through.

“They’re fierce, and I see a lot of myself in the younger generation. They’re what the sport’s going to be relying on moving forward.”