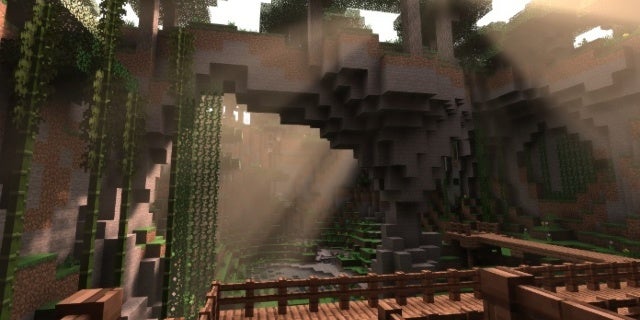 Minecraft is officially set to get a whole lot prettier with the addition of ray tracing support, thanks to a partnership with Nvidia. The game is set to receive real-time ray tracing in a future update, which will significantly improve lighting, reflections, shadows, and more. It’s coming to the PC version of the game only at the moment, but it’s still a huge step forward for a game that’s graphically been rather simplistic in the past.

It’s also worth noting that, for now, ray tracing support is set to be rather limited, and isn’t expected to actually release until next year. Interested PC players will need a Windows 10 that can use DirectX R, with Mojang specifically noting that the NVIDIA GeForce RTX GPU should do just fine. More technical requirements are set to be shared later this year, and there will also be an optional preview of this technology in a future beta.

“With raytracing, lighting is upgraded to real-time global illumination, emissive blocks like Glowstone and Lava can illuminate environments, water, glass and other reflective surfaces show accurate real-time reflections and shading and shadowing gains lifelike accuracy,” the description for the video by Nvidia revealing the graphical update states. “And on it goes, because the entire game is enhanced with ray tracing.”

The timing here is, of course, rather interesting given that Mojang recently announced that its own Super Duper Graphics Pack — which was set to overhaul the look of Minecraft — would not move forward. That said, perhaps this Nvidia news is meant to soften the blow and provide another route to better graphics.

“We realise this is disappointing to some of you – there was a lot of enthusiasm for Super Duper from inside and outside the studio – but unfortunately, we aren’t happy with how the pack performed across devices,” Mojang wrote on its website when it announced that development on the pack was cancelled. “For this reason, we’re stopping development on the pack, and looking into other ways for you to experience Minecraft with a new look.”

What do you think of the new graphical update for Minecraft? Does it soften the blow of the Super Duper Graphics Pack getting canned? Let us know in the comments, or hit me up directly on Twitter at @rollinbishop to talk all things gaming!

Minecraft is currently available on… just about every possible electronic gadget it can fit on. This specific graphical update, however, is exclusive to PC, and even more specifically to those with a particular graphics card. You can check out all of our previous coverage of the Microsoft-owned title right here.