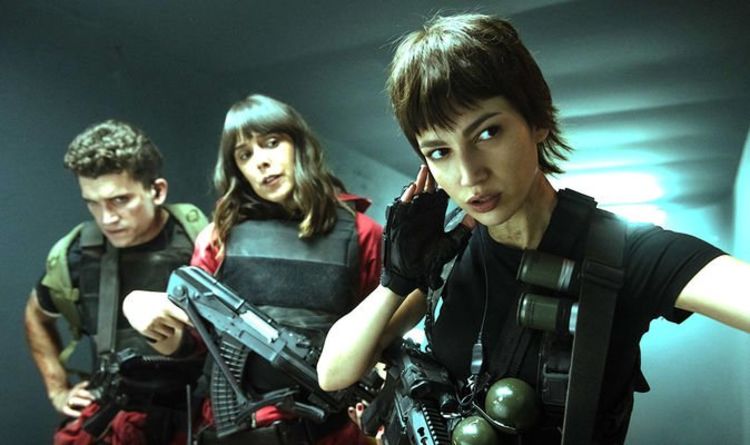 Money Heist season five is on Netflix now and fans were sad to hear it would be the final season. The last outing has been split into two parts, with the first five episodes arriving on September 3. Express.co.uk has all you need to know about when the second half of the season will air.

When is Money Heist season 5 part 2 out?

Back in July 2020, La Casa De Papel, as it is known in Spanish, was renewed for its fifth and final season.

In May 2021 Netflix announced the release date for the final outing, revealing it would be split into two five-part instalments.

The first five episodes have now aired and they see The Professor (played by Álvaro Morte) face Sierra (Najwa Nimri) after she hunted him down.

Fans were instantly hooked as the first half of the season features discoveries, betrayal and emotional backstories.

The fifth episode saw narrator Tokyo (Úrsula Corberó) reminisce about past times, including when she first met the Professor.

With the season ending on an emotional note, fans are keen to know when the final batch of episodes will air.

The final five episodes will all drop at the same time on December 3, so viewers have a few months to go yet.

But they have plenty to keep them entertained in the meantime, including the documentary Money Heist: The Phenomenon.

The Netflix factual programme looks into how the series went from zero to 100 in terms of its popularity.

The series originally aired on the Spanish network Antena 3 and although it started out well, it failed to hold viewership ratings.

It was not until Netflix acquired global rights to the series that it became an international hit.

Writing in El Mundo in 2019, Javier Gómez Santander said: “[Money Heist had] no promotion or anything. Netflix put it in that pile of series that it has, which is like the sock drawer that you never look in and from which only the algorithm can rescue you, and we didn’t think it was a big deal.”

The creators of the series were surprised that the crime drama has continued for so long.

The first five episodes of part five have all been given unique titles, and they are as follows:

Episode one – The End of the Road

Episode two – Do You Believe in Reincarnation?

Episode three – Welcome to the Spectacle of Life

Episode four- Your Place in Heaven

The titles for the episodes airing on December 3 have not yet been announced.

The first five episodes provide insight into some of the characters’ backstories through a series of flashbacks.

For example, Berlin (Pedro Alonso) and his son are seen carrying out their first heist together.

Fans have already started to share their thoughts on the final season, with one saying on Twitter: “It was hard but now we can finally say that ‘We love Arturo’.”

Why is Money Heist ending?

Fans were left with mixed opinions when they found out season five would be the final instalment.

Money Heist showrunner and Executive Producer Álex Pina said the series was ending as some of the characters’ storylines had already been exhausted.

The series was never expected to last beyond season two, but when Netflix saved the suspenseful drama, everything changed.

Director Jesús Colmenar said things will come to a satisfying close in the final episodes.

He said: “It is very different from all the previous seasons and we have put all our eggs in one basket to go out with a bang.”

Money Heist season 5 part 2 will air on Netflix on December 3.