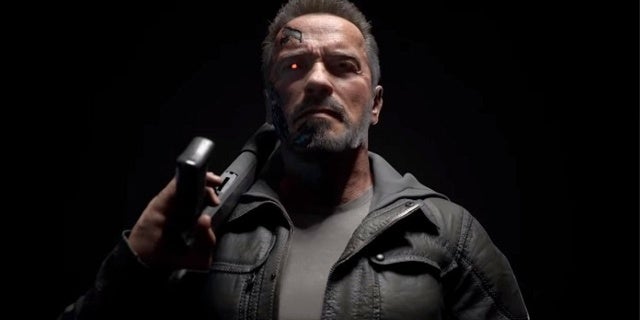 Any Mortal Kombat 11 players who are hoping to hear actor Arnold Schwarzenegger reprise his role as the Terminator when the DLC character releases shouldn’t hold their breath. Despite speculation which suggested we might hear Schwarzenegger’s voice in the game coupled with the remarkable similarities between the actor and the in-game character, it’s been confirmed that Schwarzenegger won’t be voicing the Terminator.

Mortal Kombat 11’s next DLC characters were announced not long ago when the trailer above revealed everyone who would be added to the game as part of the Kombat Pack. We already knew about most of the characters, but two of them remained a secret. One of those was the Terminator while the other was the Joker with the former modeled after Schwarzenegger’s character from the Terminator movies.

When the character was first revealed, the shared likeness between the fighter and the actor caused many to think that Schwarzenegger might lend his voice to the role. Couple that with the tweet below from creative director Ed Boon and one might indeed be led to believe we’d hear the actor in the game.

Part of me still can’t believe we got Arnold.

Hollywood Reporter has confirmed that won’t be the case though. Sources familiar with the game as well as Warner Bros. Interactive itself told the outlet that the actor will not be voicing the Terminator in the game, so players will have to be satisfied with only the character’s appearance.

While some people won’t be happy to hear that, there are also those who aren’t happy that the Terminator and the Joker are in the game at all. Mortal Kombat 11 omitted several characters from the series in the current roster, and some players who’d picked out their favorites from before were counting on the Kombat Pack to bring them to the game even if it was as DLC. With these two guest characters and Spawn taking up three of the five DLC slots, Boon’s tweet above and others from the official Mortal Kombat channels have been met with responses like the ones below.

Part of me still don’t believe we have joker out of the potential mk characters not in pic.twitter.com/l0TKDsCGyH

Part of me still can’t believe NRS doesn’t care about what fans want.

Mortal Kombat 11 will add the Terminator as DLC on October 8th.