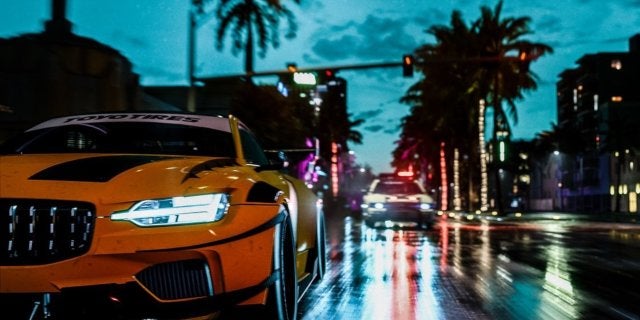 Though there were some obvious elements of gameplay included in the Need for Speed Heat announcement trailer last week, the actual, official gameplay trailer dropped today as part of the opening salvo of Gamescom 2019 announcements. One could argue that the European video gaming convention is already truly, literally bringing the heat.

In the newly released gameplay trailer, which you can check out below, publisher Electronic Arts and developer Ghost Games show off customization options as well as “the return of cops” in Need for Speed Heat. Official racing events happen during the day in the game’s open world, and cops will keep a watchful eye on racers to make sure nothing untoward happens. During the night, illicit street racing goes down, and the more rep players gain, the more the cops will want to get them.

Notably, the trailer indicates parts are earning through grinding rep at night, while money is earned through competing in official events during the day. This is in stark contract to the previous system introduced in 2017’s Need for Speed Payback. Oh, and those aforementioned customization options? That seemingly includes one specifically to tune cars’ exhausts to make them sound like you want.

In addition to all this, car customization can now be accomplished through a companion app called Need for Speed Heat Studio, which is available today. The game will also feature racing leaderboards and challenges, because what would a racing video game be if you couldn’t compare times and such?

What do you think about what we’ve now seen of Need for Speed Heat‘s gameplay? Are you excited to see more, or has this iteration of the franchise already missed the mark in your opinion? Let us know in the comments, or hit me up directly on Twitter at @rollinbishop to talk all things gaming!

Need for Speed Heat is scheduled to release for PlayStation 4, Xbox One, and PC on November 8th. It will first be available via Origin Access Premier on November 5th. You can check out all of our previous coverage of the title right here.