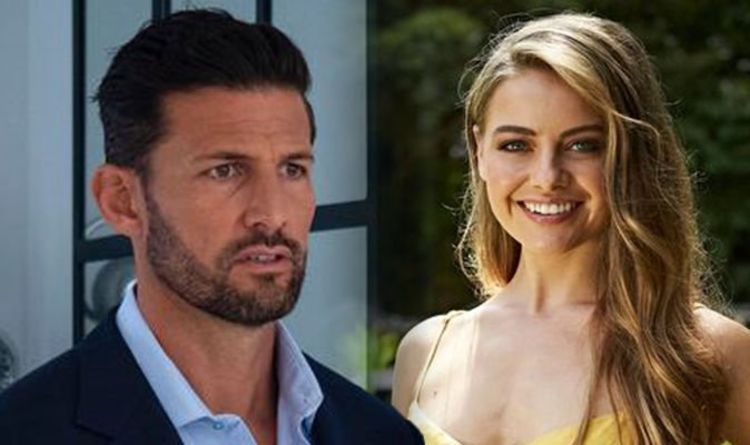 Neighbours fans are keen to see Chloe Brennan (played by April Rose Pengilly) and Elly Conway (Jodi Anasta) get back together.

The couple, dubbed “Chelly” by fans are about to go on a break, but it seems that will only open the door for Pierce Greyson (Tim Robards) to go back into her life.

However, in the coming weeks, everything will be flipped upside down during an eventful movie premiere.

Following Chelly’s break up, Pierce decides to help out Chloe and show her love is not lost between them.

After gifting her a shopping voucher, the couple get closer to each other but he decides to hold back just in case she isn’t ready to move on yet.

Pierce tentatively invites Chloe to a movie premiere and the pair get all dolled up for the event.

However, Elly is also there and runs straight into Pierce where they have a heated discussion.

There’s huge drama when Elly slips up the stairs and falls on to her tummy, putting her baby in peril.

While the results of what happened are being kept under tight wraps, actor Tim has spilled all on the action in an exclusive interview with Express.co.uk.

When asked what Pierce’s intentions are that night, Tim coyly responded: “At that point, you might be thinking, ‘Is Pierce trying to get Chloe back?’

“But at the moment he’s a good character, but there is a time where there’s some messages…”

The actor continued: “Even though they’ve broken up, Elly is trying to be friends and she’s still messaging and contacting Chloe.

“Pierce is sitting back and seeing how much it’s affecting Chloe.”

Tim reasoned: “He’s not trying to steal Chloe back himself but he hates seeing Chloe so upset.”

And in terms of the movie premiere, does Pierce actually cause Elly’s fall?

Tim teased: “It turns into a bit of an even that doesn’t quite go right.”

He commented: “Did he push her too much? Was he in the right place?”

But are Chloe and Pierce meant to be together? Tim explained: “I don’t think either are ready.

“They’re still making their way through being scared but I think it’s better for both of them not to commit.”

Fans will just have to wait and see which one of her lovers Chloe chooses.