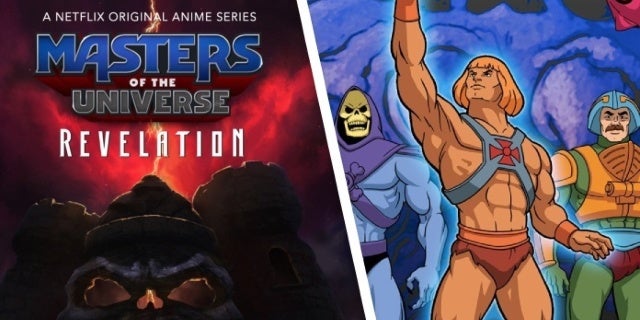 Masters of the Universe fans were given a pretty pleasant surprise on Sunday, when it was revealed that Netflix has greenlit a new anime titled Masters of the Universe: Revelation. While some had assumed that the series would be an entirely new take on the iconic franchise, similarly to Netflix’s She-Ra and the Princesses of Power, the announcement was apparently more than meets the eye. As Netflix announced, Revelation will actually be a continuation of the canon of the original animated series, focusing on the “unresolved storylines of the classic ‘80s era, picking up many of the characters’ journeys where they left off decades ago.”

For some MOTU fans, this will surely be a surprise, as the animated canon of He-Man and the Masters of the Universe has been largely unexplored since 2004. A “modern” take on the series was most recently introduced from 2002 to 2004, to coincide with Mattel’s reboot of the toy line. That most recent iteration of the animated series became pretty beloved by fans, who regarded it to be more character-and-continuity-driven than previous versions.

Revelation will be showrun and executive produced by Kevin Smith, who is apparently pretty excited to continue the original animated series’ story.

“I’m Eternia-ly grateful to Mattel TV and Netflix for entrusting me with not only the secrets of Grayskull, but also their entire Universe.” Smith said in an official statement. “In Revelation, we pick up right where the classic era left off to tell an epic tale of what may be the final battle between He-Man and Skeletor! Brought to life with the most metal character designs Powerhouse Animation can contain in the frame, this is the Masters of the Universe story you always wanted to see as a kid!”

The series will be produced by Mattel TV VP Rob David, with a writing staff that includes Eric Carrasco (Supergirl), Tim Sheridan (Reign of the Supermen), Diya Mishra (Magic the Gathering) and Marc Bernardin (Alphas).

“Masters of the Universe has been a cultural phenomenon for generations, inspiring fans to discover their own power within,” David said in a statement. “Fans of this franchise have been waiting for the continuation of these characters, and Kevin Smith, as a Masters superfan himself, is the perfect champion and partner to expand the canon through a dynamic animated series on Netflix.”

What do you think of Masters of the Universe: Revelation continuing the original franchise? Share your thoughts with us in the comments below!