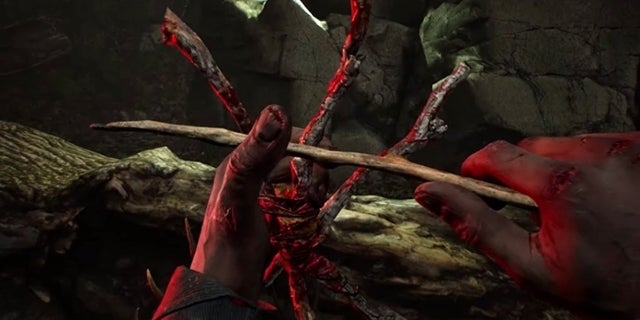 With less than two weeks to go before Bloober Team releases their original story set in the Blair Witch universe, fans are gearing up to take on whatever comes their way in the Black Hills Forest. That said, during the special Gamescom edition of Inside Xbox, the devs dropped an entirely new trailer that dives a bit deeper into the story that will be featured in the upcoming game. In addition to this, some rather terrifying gameplay footage was also shown, and it definitely looks like players will be on the edge of their seats during their playthroughs.

According to the official description, the above trailer “gives players a look into the original story of Blair Witch via never-before-seen gameplay, flashbacks and eerie visions that plague Ellis as he ventures deeper into the Black Hills Forest. Catch a glimpse of what awaits Ellis as he discovers the infamous house and more.” Needless to say, this trailer is far more intense than the recently revealed tour through the woods, which you can find right here.

For those who are unsure what the upcoming Blair Witch game is all about, here’s more:

“From the creative minds behind the critically acclaimed Layers of Fear, experience first-hand the toll that fear can take on the mind in an original story. Blair Witch is a first-person psychological horror game that studies your reactions to danger and stress. Your darkest fears will awaken.

“It’s 1996. A young boy disappears in the Black Hills Forest near Burkittsville, Maryland. As Ellis, a former police officer with a troubled past, you join the search – with your trusted canine companion, Bullet, at your side. What starts as an ordinary investigation soon turns into an endless nightmare as you confront your fears and the Blair Witch, a mysterious force that haunts the woods.”

Blair Witch is set to officially launch on August 30th for PC and Xbox One. If it’s additional information about the upcoming horror game that you are seeking, look no further than our previous coverage.

What do you think about all of this? Are you ready to sit on the edge of your seat while playing Blair Witch later this month? Sound off in the comment section below, or feel free to hit me up over on Twitter @anarkE7!