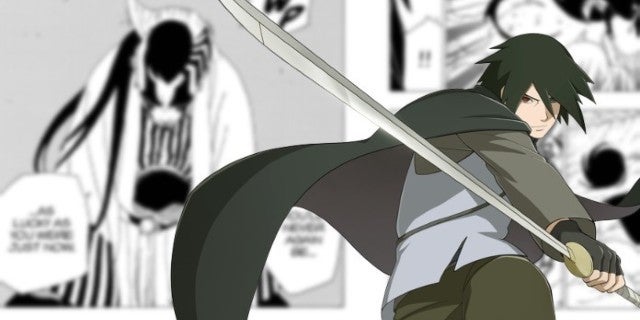 Boruto: Naruto Next Generations‘ Kawaki focused arc has been heating up in the manga as the leader of Kara, Jigen, has surprisingly jumped into action much sooner than initially expected. The shonen formula usually sees the big villain boss attack when the rest of his group has been taken down one by one, but clearly his need for Kawaki to return to Kara’s base has driven him into action much sooner.

With the latest chapter of the series kicking off a major fight between Jigen, Naruto, and even Sasuke, there’s an even greater threat coming as the end of Chapter 37 sees a cliffhanger in which Jigen is beginning to transform into a new, Karma enhanced form.

The latest chapter teased that the Karma mark power would eventually lead to a horned form as Kawaki began to tap into that dark power under duress. Jigen seemed surprised that Kawaki had progressed to this point, and it seems that he was speaking from experience as the end of Chapter 37 sees Jigen taking on a very similar transformation. Thanks to Sasuke and Naruto cornering him once they figured out his Ant-Man like ability, Jigen vows they won’t be “lucky” again.

While there’s currently no clue as to how this form will boost his strength, it’s certainly going to be trouble given that his use of Karma has already given Naruto and Sasuke plenty of trouble. Opening portals to new dimensions, fighting skills able to counter Naruto and Sasuke’s teamwork, and other skills he has yet to show makes him a huge threat.

But what the more interesting thing is how this new form might be tied into his role in the Otsutsuki Clan. A previous chapter had Sasuke witness Jigen taking on a mysterious horned form. While this look at the end of Chapter 37 isn’t quite the same, it might be a prototypical kind of transformation in which he can still unleash his true form later. Either way, fans will see just how much this new form will boost his strength in the next chapter of the series. Hopefully Naruto and Sasuke will still be able to handle whatever comes their way.