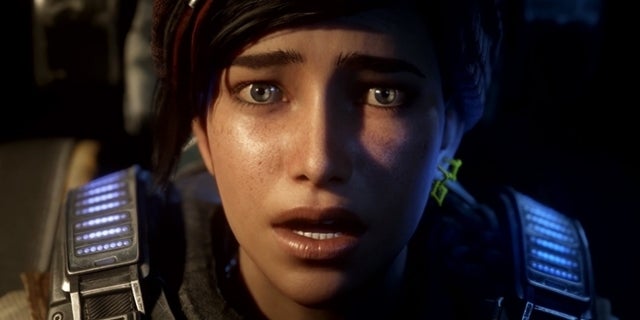 Only a few weeks remain before Gears 5 arrives for players to enjoy, which means we will likely be seeing a couple new trailers between now and then. The Coalition are at this year’s Gamescom in Cologne, Germany to reveal more information about the next Gears of War installment, and they are already dropping new details about the upcoming game. That said, the devs brought with them a new story trailer for Gears 5 that places the spotlight on none other than Kait Diaz, the inbound title’s main protagonist.

“With all-out war descending, Kait Diaz breaks away to uncover her connection to the enemy and discovers the true danger to Sera – herself,” reads the official description of what players can expect in Gears 5. As can be seen in the trailer above, Kait appears to have found what she was seeking, but she knows that it must be killed. Needless to say, things are going to get a bit rocky throughout the campaign featured in Gears 5.

We already know that the Gears 5 campaign is the largest in the series’ history as well as the largest PvE and versus modes. Speaking about The Coalition, multiplayer design director Ryan Cleven recently said, “They’re extremely passionate about bringing their mark, a high degree of quality, and a legacy that Gears fans will recognize. There is no magic bullet; it’s trusting the people around you. [Studio head Rod Fergusson] has this saying he repeats every time we start a new project: ‘If you want to go fast, go alone. If you want to go far, go together.’ That’s something we really believe in at the studio. We believe in trusting each other so we can get efficiency out of that.”

Gears 5 will be arriving on September 10th for those on PC and Xbox One. Ultimate Edition owners will be able to jump in four days early with the help of Xbox Game Pass Ultimate. For even more information on the upcoming title, check out some of our previous coverage.

What do you think about all of this? Are you excited to learn more about Kate Diaz and what the Gears 5 campaign is all about when it drops next month? What about the title are you anticipating the most? Sound off in the comment section below, or feel free to hit me up over on Twitter @anarkE7!