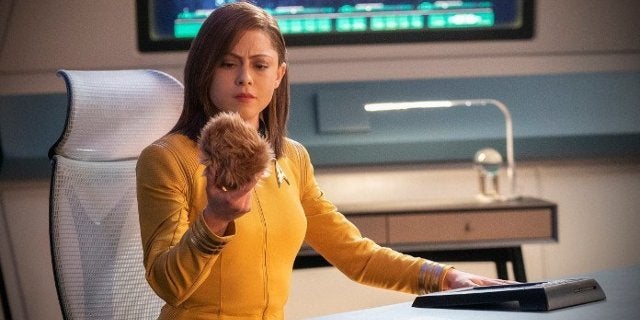 Star Trek: Short Treks is again. The new sequence of Short Treks premiered with the shock debut of “Q&A” on Saturday. CBS All Access has now launched the trailer for the subsequent installment of the sequence, “The Trouble With Edward.” The episode stars Rosa Salazar (Alita: Battle Angel, Bird Box) as a brand new Starfleet captain and H. Jon Benjamin (Archer, Bob’s Burgers) as a Starfleet science officer finding out tribbles. The episode is written by Graham Wagner, and directed by Daniel Gray Longino. The synopsis for the episode reads, “Newly minted Captain Lynne Lucero (Rosa Salazar) is worked up to take command of the U.S.S. Cabot, till she meets Edward Larkin (H. Jon Benjamin), an ornery scientist who believes he has discovered a revolutionary new use for tribbles…” You can watch the trailer above.

The full schedule for upcoming installments of Star Trek: Short Treks on CBS All Access follows:

Are you enthusiastic about the return of Star Trek: Short Treks? Let us know in the feedback. “Q&A” is now streaming on CBS All Access.