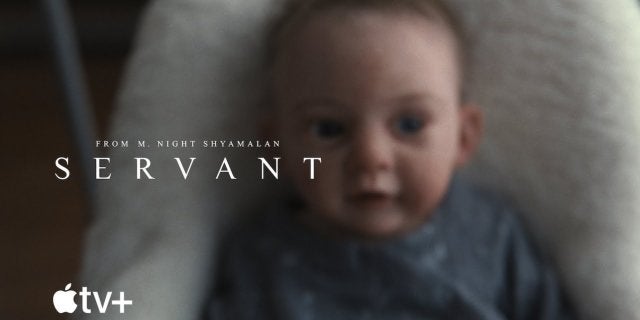 While a few lucky fans got a look at the series at New York Comic Con earlier this year, the world can now find out more about the show thanks to the brand new trailer — the second released this week. It seems likely we will see more of these, which amount to “character” teasers, even though in this case the character in question is a baby who…well, watch it.

…You back? Good, let’s talk about that.

In the series, the couple lost their son Jericho at 13 weeks, and Dorothy took it hard, but was able to make it through that trauma thanks to the doll. The doll’s meticulous craftsmanship, and the glee that Jericho’s mother has at first “meeting” the doll, are the heart of this teaser, which presumably comes earlier in the story than the one released earlier this week, in which the couple find a nanny.

In that trailer, which you can see at the link above, the new nanny — Leanne, played by Nell Tiger Free — doesn’t seem to mind treating the doll as a normal child, and Sean is perplexed by this and wants to know where Dorothy found the girl. This paves the way for several more flashes of footage that suggest something isn’t right with the new nanny, but also that the men are hiding something else, with the narration saying “what if she wakes up” and another lady asking “what did those boys tell you about what happened.”

There seems to be an implication here that while Dorothy and Sean are maybe not choosing the absolute best way to deal with their grief, it’s actually Leanne who poses a danger to the family. No clue, just yet, on how or why.