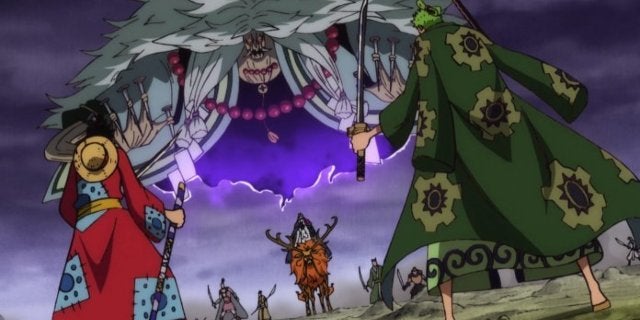 One Piece‘s Wano Country arc is starting to heat up in the anime as Luffy has finally gotten up to speed on just how wrecked everything has been by Kaido and his forces. After surprisingly reuniting with Zoro in a previous episode, Luffy now has to contend with those who have been running roughshod across this poor region in his first major battle of the arc thus far. Coming face to face with fellow Worst Generation member Basil Hawkins, the two are going to need some new tricks to win.

Episode 898 sees their fight officially kick off after Luffy and Zoro deal with a bunch of nameless grunts. It’s here that fans see Hawkins’ strength in full display with his secret weapon, his Strawman cards.

After Luffy gets to show off his “samurai skills” in the fight against a bunch of Beast Pirates, he and Zoro are left stunned when they see the full range of Hawkins’ abilities. Not only does Hawkins have a methodical pace in his actions, something that the active Zoro and Luffy aren’t quite used to, each of his moves seems to contain a ton of power.

His Straw Straw Fruit allows him to absorb fatal damage into voodoo dolls that sprout from his body. With each one representing the life of one of his men, he has no fear against Luffy and Zoro. This is especially true in his fighting style, which sees him calmly pick through his tarot cards. His slow pace definitely throws Luffy and Zoro off their game as they’re forced to do nothing but watch as Hawkins readies his deadliest weapon.

After summoning a giant straw man with his most powerful card, Luffy and Zoro are soon whisked away by the giant dog Komachiyo. Their fight will be continuing in the next episode as Otama’s still burning up with her fever. Saving Otama takes top priority over this fight, and even though Zoro and Luffy argue against this even they realize that Otama’s more important.

But this is the first major foray into the Wano Country arc’s intense battles. Things will only get fiercer from here, and soon anime fans will discover why this arc has been such a big hit with fans who have read ahead in the manga.