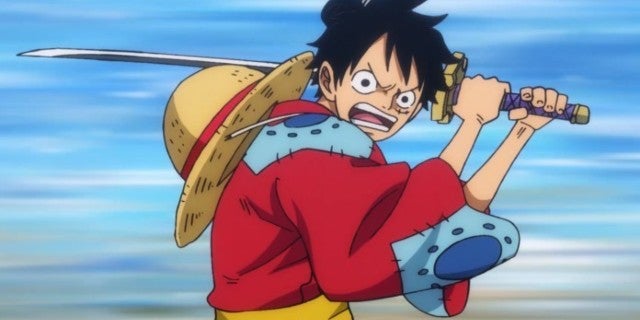 One Piece‘s Wano Country arc is in full swing in the anime, and the series has just broken out into its first major fight of the arc. Now that Luffy and Zoro have finally been reunited after spending literal years apart, it’s time for them to team up against the threat of fellow Worst Generation member, Basil Hawkins. But Luffy’s been itching for a fight ever since he’s come to this land of samurai.

In the last episode, Luffy “procured” a special sword for himself to go along with his Wano-ready outfit and Episode 898 has Luffy show off just what he can do as a full samurai. Turns out, it’s just as little as you’d expect. But with Luffy’s hilariously throwing himself into the fight, his “sword skills” are definitely deadly.

In Episode 898 of the series, Hawkins and several of his forces have confronted Luffy and Zoro. When Luffy draws his new cursed sword, he hilariously refuses to let Zoro examine it because it’s a reflection of his “samurai soul.” It’s clear that Luffy’s just having fun here, even using the classical “de-gozaru” honorific in his speech, and that comes across all too clear in how he uses the sword itself.

He yells that this is now a “sword fight,” but he begins by throwing the sword’s scabbard off into the sky. Then he says he’s going to “slice up” his opponents, but soon launches his Gum Gum Pistol. With sword in hand, he punches the first crowd of Kaido forces away and hilariously doesn’t use the sword.

As the fight continues, Luffy does show some skill in wielding this new blade as he blocks attacks and slashes some deep cuts, but all of his moves are still Gum Gum related. Luffy’s playing a being a samurai, and fans are having a good time watching him do so. But the same can’t be said for Zoro, who continually got annoyed seeing Luffy mishandle such a rare looking sword.

Still, this is a fun introduction to Wano’s greater battles. Things have only begun, however, as Basil Hawkins is gearing up to get into the sword action himself in the next episode of the series.