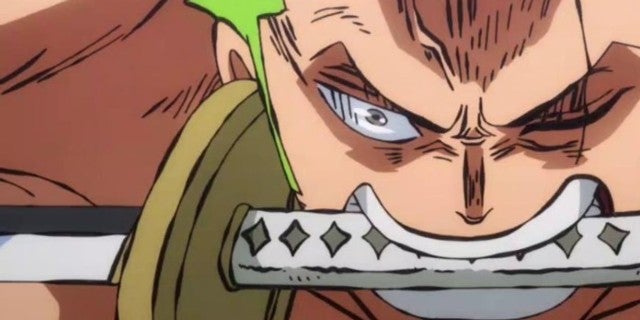 One Piece fans know a thing or two about Roronoa Zoro. The master swordsman is one of the series’ main characters who agreed to bolster Monkey D. Luffy as a pirate way back when. Now, Zoro is living life in Wano after the Straw Hats try to free the land, and fans were taught a special fact about Zoro.

Well, about his sword specifically. It turns out one of Zoro’s three swords as a seriously cursed past that is said to have led Wano to ruin.

Recently, One Piece chose to explore a bit of that history with chapter 952. The chapter begins with Zoro fighting the bandit who stole Shusui off him several chapters back, and the swordsman refuses to gift Zoro the blade back.

“You will not have it back! Not that one,” he says before detailing the blade’s troubled past.

“The katana you had – Shusui – was a stolen national treasure of Wano. Its removal from our land was the start of all our misfortune. That incurred the wrath of the God of the Blade! Since then, each region suffered loss after loss until the country itself fell under enemy control.”

As you can see, the lore of Shusui is a complicated one. Fans knew already the sword came from Wano and that it belonged to a famed swordsmen from the country. When he died, the sword was buried with him, but foreign thieves stole Shusui from Wano years ago. Along the way, it wound up in Zoro’s hands, and this bandai has no intentions of giving it back to Zoro. To him, the weapon is a matter of national pride, but fans are sure Shusui will wind up with Zoro once again before long.

So, are you excited to learn more about this One Piece blade? Let me know in the comments or hit me up on Twitter @MeganPetersCB to talk all things comics and anime!