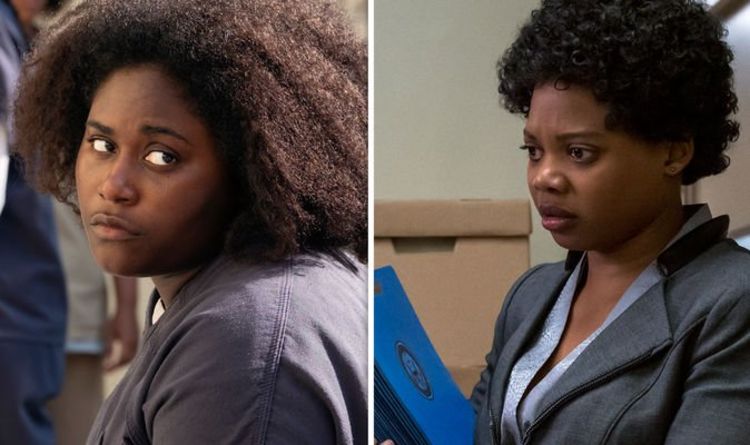 Orange Is the New Black seasons one to seven are available to stream and download on Netflix now. Susan Heyward joined the cast of OITNB in season six as a rookie Corrections Officer (C.O) Tamika Ward. Tamika was reunited with Taystee Jefferson (Danielle Brooks) who had been transferred to the supermax facility awaiting trial for murder.

How do Taystee and Warden Ward know each other?

Tamika Ward and Taystee Jefferson have reunited in season six of Orange Is the New Black.

At the time, Ward was a new C.O at Litchfield Supermax.

Taystee, alongside other Litchfield inmates, were transferred there following the prison riot of season five.

Tamika and Taystee went to high school together and were co-workers at a burger-joint called Storky’s.

WHAT HAPPENED BETWEEN TAYSTEE AND CINDY?

While working at Storky’s, Tamika and Taystee used to smoking marijuana on shift and even pocketed money from burger sales instead of putting the cash in the till.

In season six, Tamika helped Taystee get in contact with the former warden, Joe Caputo (played by Nick Sandow).

She even attended Taystee’s murder trial twice, sitting beside Caputo.

When Taystee was found not guilty in the season six finale, Tamika was visibly upset.

By season seven, Tamika was promoted to prison warden and Taystee was serving life in prison for a murder she did not commit.

HOW DID DADDY DIE IN OITNB?

In the final season, Tamika inspires Taystee to keep fighting for her life and her freedom.

She even hires Taystee as her assistant, to make sure she stays out of trouble.

Speaking to Vanity Fair, Heyward said: “I think she’s fighting for herself—who she could’ve been—and for all of the other people she’s known who have gotten caught up in jail.”

As warden, Tamika closes down the prison’s solitary confinement unit, sets up farm-therapy and GED programs for the inmates so they can achieve their high school diploma.

Tamika also encouraged Taystee to become a tutor for the GED students and Taystee reluctantly agreed.

Heyward and Brooks know each other in real life as they both attended the same South Carolina Arts High School.

WHO IS MONICA’S DAD?

Speaking to Vanity Fair, Heyward said: “I don’t know what kind of magic crystal ball the writers had, but we actually did have that foundational relationship to play with.”

She added: “When [Danielle] saw my name on the call sheet, she immediately texted me and was like, ‘Girl, are we gonna get to play together? Yes!’”

Heyward also revealed that she and Brooks got to improvise a scene together.

The moment when Tamika goes into Taystee’s cell after she has recently discovered Doggety’s (Taryn Manning) body, was improvised.

Heyward explained: “[Tamika] crosses [a] boundary, and sits down—in a suit—next to her, and talks to her just as a friend instead of only as a warden. That was so small, and there were [only] so many words. [But] sometimes in order to get into that really delicate place, you go off script a little bit.”

Viewers were devastated when Tamika was fired at the end of season seven after a drugs bust in the prison.

Tamika’s legacy as warden ends in the series finale when Taystee returns to her cell to find an envelope from her with the GED certificates for her four students.

Orange Is the New Black season 7 is streaming on Netflix