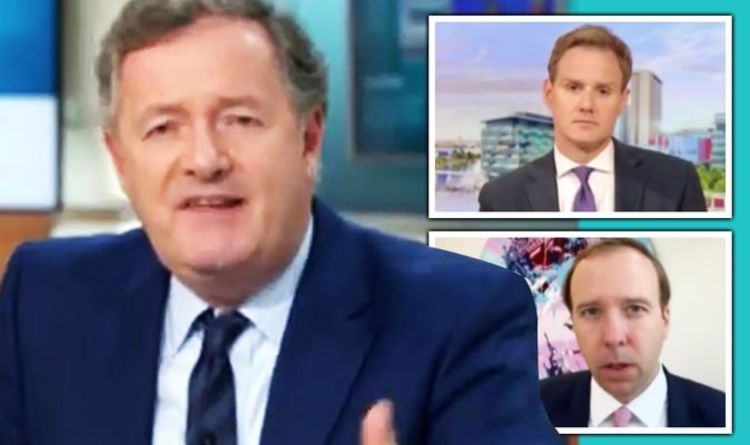 Pier Morgan, 55, was seething with Dan Walker, 43, as BBC Breakfast hosts continue to speak with senior Government ministers in the midst of the coronavirus crisis. With the Conservative Cabinet boycotting Good Morning Britain, the journalist felt his colleague was lacking when it came to questioning Matt Hancock, 41. As his co-host Susanna Reid, 49, tried to tell viewers what the Health Secretary had been saying, the outspoken presenter declared: “Jump in,” as he was frustrated with his rival.

The presenters are known for having a rivalry, often taking to Twitter to gloat about each their respective show’s ratings.

Watching Walker interviewing Hancock about the daily coronavirus testing figures, which haven’t been released to the public for the past 39 days, Morgan couldn’t hold back his fury.

With a clip of the Health Secretary’s response being shown to ITV viewers and his interviewer struggling to get a word in edge ways, the shot returned to the Life Stories star who immediately provided commentary on the moment.

“Get in there Walker, for goodness sake man. He’s talking complete nonsense,” the journalist declared.

Reid jumped in as she remarked: “Oh my goodness. Now you’re ranting at presenters on other programmes.”

Morgan continued: “Because he’s [Walker] getting the interviews because he won’t jump in and say, ‘What are you talking about Health Secretary?’

“And yet you pretend it’s meaningless,” he continued as his rant turned on towards the politician and his lack of explanation.

It wasn’t long before Walker responded to his colleagues outburst and shared his response on Twitter in view of his 662,100 followers.

“That’s your job. Not to sit back and tweet all the self-important rubbish you [do],” the journalist added.

“Don’t let him get away with it,” Morgan blasted as he concluded his rant about his colleague’s interviewing technique.