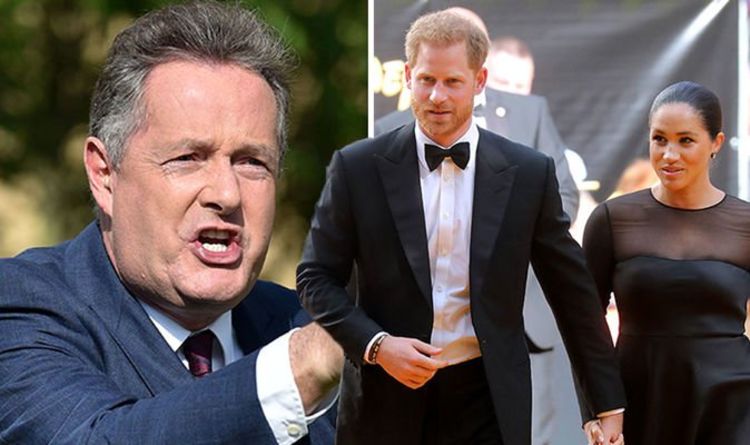 Piers Morgan, 54, took to the micro-blogging site to blast the pair after Sir Elton John, 72, defended Meghan Markle and Prince Harry’s use of his private plane for a getaway. The Good Morning Britain presenter slammed the royal couple and said they should “practise what they preach”, as the parents of three-month-old Archie are regularly vocal on encouraging everyone to change their habits to help tackle climate change. The ITV favourite responded to a Twitter user who took aim at Piers after they questioned how many times he has flown around the world this year. The person in question wrote: “How many air miles have you travelled this year, Piers. Any of them essential or unavoidable?”

But the breakfast show presenter branded the comment “irrelevant” because he doesn’t “lecture” people about helping the environment.

In view of his 6.7 million followers, Piers hit back, saying: “It’s irrelevant, I don’t lecture people about the environment & saving the planet. If you do, like Meghan/Harry, then practise what you preach.”

Piers’ tweet certainly divided opinion on the social media site with some agreeing with the ITV star.

One person said: “I am a supporter of the Royal family but do think Harry and Megan should think before they go on about this. Fine if they want to travel for holidays but don’t be so sanctimonious about things like carbon footprints. It’s hypocritical and sends out the wrong message.”

Another person commented: “Piers does have a point.”

Meanwhile, others offered support to The Sussexes, as one person chimed: “On the one hand he’s right but on the other hand you could hardly expect them to go to Elton’s by Ryan Air.”

Another person added: “I believe that @eltonofficial has indicated it’s his plane and he has taken the necessary steps to make his plane greener. Calm down.”

His apparent fury comes after legendary musician Sir Elton said he was “deeply distressed” about how Prince Harry and Meghan Markle’s stay at his home in Nice had been reported.

In a statement, Sir Elton wrote: “I am deeply distressed by today’s distorted and malicious account in the press surrounding the Duke and Duchess of Sussex’s private stay at my home in Nice last week.

“Prince Harry’s Mother, Diana Princess Of Wales was one of my dearest friends. I feel a profound sense of obligation to protect Harry and his family from the unnecessary press intrusion that contributed to Diana’s untimely death.”

In response to the post, Piers claimed Sir Elton was “digging a bigger crater.”

He wrote: “So the ‘over-worked’ millionaire ‘eco-warrior’ Sussexes cadged a freebie private jet off their pop star mate, who then paid cash to offset their damage to the environment?

“I like Elton, but jeez, talk about digging a bigger crater.”(sic)

Piers did not stop there after a social media user accused him of “preaching” to others.

They wrote: “You appear to preach about many things though? Often because it seems for attention seeking?”

But Piers replied: “I practise what I preach: I don’t buy vegan sausage rolls, wear papooses, own guns, or identify as gender-fluid.”