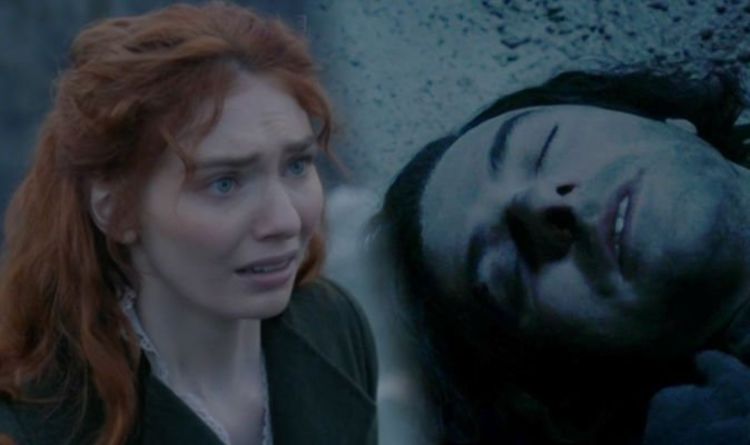 Tonight’s Poldark no doubt left viewers on the edge of their seats as the instalment ended with Ross (played by Aidan Turner) being hit over the back of the head as he mourned for his friend Ned Despard (Vincent Regan) who had been hanged for treason.

Ross wept as he looked out over the Cornish coastline but he had little time to think of his friend as he was attacked and taken to a cave.

He appeared to be unconscious as a voice was heard telling him: “Compliments of Mr Merceron.”

While many may be hopeful Ross will be found and recover in the next episode, it doesn’t look as though there will be a happy ending for his wife Demelza (Eleanor Tomlinson).

In a teaser for the penultimate episode she can be seen distraught as she searches the cliffs and coastline of Cornwall looking for her husband.

“Anything?” she is heard asking her brothers Sam (Tom York) and Drake Carne (Harry Richardson) as they carry lanterns looking for their brother-in-law.

As Demelza tries not to break down in tears, Drake tells her: “It’s like he melted off the face of the earth.”

It seems Ross’ attack is part of a much bigger storyline than fans may have thought as Tess Treggiden (Sofia Oxenham) is seen raising a glass of wine while sitting next to Sam.

Could Demelza’s former maid have played a part in helping Ross be taken and killed?

That’s not the end of the flame-haired beauty’s troubles either as she can be seen being attacked herself in the preview for the next instalment.